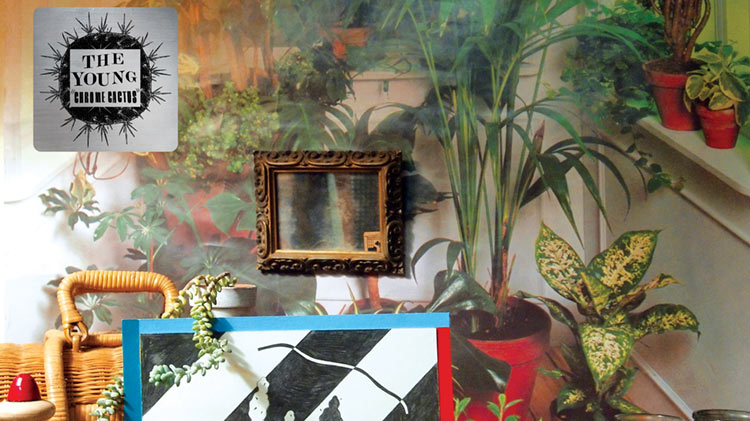 Considering that record collectors are the only people who use the term, you’d think “record collector rock” wouldn’t be a pejorative. But the inherent self-deprecation actually demonstrates a deep respect for the creative process: the typical aficionado expects far different things from the music nerd at the bar and the person up there on stage. It’s perfectly fine for your friend to just rattle off whatever they’re listening to of late and, hell, it can be enjoyable when musicians acknowledge their influences and figuratively do the same—provided they’re able to express not just what they’re inspired by, but also why. The Youngdon’t do anything of the sort on Chrome Cactus; even worse, they’re “record collector rock” that doesn’t even have an interesting record collection.

This is not to say the Young lack good taste—they just have nearly the same exact taste as nearly every other upstart guitar band that wants a minute of your time. At the very least, they put on for their city of Austin, adhering to the presumable spirit of SXSW; which is, to veer off in a multitude of directions while still using both parts of “indie rock” to determine their true north. Are they into psych-rock? Oh, definitely. Kraut-rock? Of course, that’s the good shit, man. ZZ Top and Tom Petty?  Hell, big part of their upbringing. The Jesus and Mary Chain?  I mean, who doesn’t like Psychocandy? The syllabus of Chrome Cactus reads like the most basic indie rock bio-as-OKCupid profile: it’s not intriguing in the slightest, but it hits all the right SEO points.

And like most astute but unambitious crate diggers, you get the sense that the Young rep JAMC because it allows them to hide behind distortion, psych, and Kraut—because when it comes to writing hooks, those formats sorta let you off the hook. Hans Zimmerman’s voice isn’t tuneless, it just has the range of a touchtone phone. He wields Chrome Cactus’ inert melodies like blunt objects, nudging at the rhythm section’s endless boogie only in the slightest. The Young don’t even really play motorik-style rhythms, as just about everything here ends in the same place it started, at the same volume. Add in Zimmerman’s nasal wheeze, and the dominant sound of Chrome Cactus is “Silversun Pickups without the ‘Guitar Hero’ riffs“, which means the Young does a better job of making you reconsider Silversun Pickups than that band’s own singles collection.

That said, it’s only offensive if you’re insulted by killing time; Chrome Cactus is actually a useful calling card for a band that could open for 95% of all major-indie guitar acts and be pleasantly ambient in a live setting, with nothing in their catalog that would disturb a conversation. But as Chrome Cactus’ captive listening audience, the closest you get to genuine pleasure is a perverse relief over the most mundane things allowing you to differentiate one track from the next.—we’re talking about details as insignificant as an acoustic guitar (“Apaches Throat”), a Beavis-esque vocal melody (“Moondog First Quarter”), and a riff that kinda-sorta sounds like Stone Temple Pilots’ “Meat Plow” (“Mercy”).

Even when record collectors use the term “record collector rock,” they likely respect the fact that making any kind of record is hard work. The process of summoning inspiration, writing songs, fine-tuning them in a live setting and laying them to tape—this takes so much self-belief, so much sacrifice, so much effort. How can you not bleed, sweat or cry on the track even the tiniest bit?  By most metrics, Chrome Cactus is one of the least interesting albums of the year; focus solely on how a presumable rock record managed to be so nondescript, and it’s one of the most interesting.