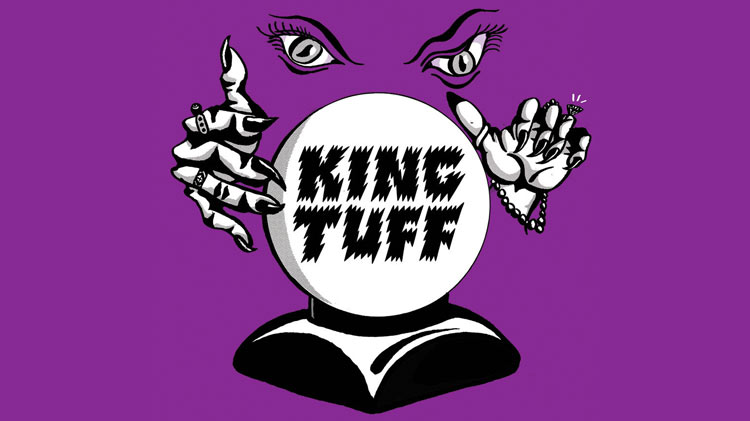 On his 2012 self-titled album, his first for Sub Pop, Kyle Thomas (a.k.a. King Tuff) became a hero at writing gooey garage punk filtered through a sticky haze of weed smoke. High and in the clouds one minute and high and on the couch the next, the in-the-pocket songwriting features a giddy mix of charming sandy-beach summer tunes—complemented by a shit-eating grin and a wink at The Monkees—and shredding classic-rock-ready guitar riffage (try to ignore the fact that Thomas’ embellished vocal timbre occasionally strikes a chord between Bugs Bunny and Nobunny). Lyrics like “There’s nothing better than alone and stoned / Listening to music on your headphones / There’s nothing better than alone and stoned” from, yep, “Alone And Stoned,” seemed so perfect in the simplicity, believability, and autonomy they promoted that it became hard not to like the dude.

The new Black Moon Spell isn’t as carefree as its predecessor—it’s bratty punk with sideburns, still reckless but with hints of self-awareness. Thomas makes a statement right from the get-go on the title-track opener, doing away with the fuzz for sludge on a hard stoner-rock lick that’s more brooding and witchy than breezy and bouncy (a hat tip to his stoner history playing alongside J. Mascis in Witch). It’s the album’s best track and an affirmation that whichever way Thomas threads his guitar, he can still hammer out a hook. And in keeping with the album’s mystical-sorcery theme—note the not-so-subtle title and artwork—wisps of noisy psych cut through several of the tracks. Both “Magic Mirror” and “Staircase Of Diamonds,” for example, could fit snuggly in a canon of polyester-draped, ’70s-era music videos, drastic zoom-ins and hyper-color fadeouts included.

None of this is to imply, however, that Thomas traded in his Dodgers cap and scraggly long hair for a $60 haircut, nor is it meant to imply that he doesn’t still find himself attending Burger Records-sanctioned parties. Black Moon Spell shows off a more mature King Tuff, but silliness is just too much a part of his repertoire for the slingshot to stay tucked in his back pocket. Led by a guitar line that might as well have been lifted straight from Spinal Tap, “Headbanger” is about swooning over a girl’s collection of metal records (“You had Sabbath and Priests and Number Of The Beast / It was heavy-metal perfection”), and a good portion of the record’s back half is dedicated to short and punchy pop-punk. Those tracks ultimately blend together to leave behind a warm-and-fuzzy nostalgia, like a foregone summer you remember being pleasant without remembering much about it all. Black Moon Spell wasn’t conceived by Thomas to be a photocopy of the self-titled album—very obviously not—but that doesn’t fix the fact that it’s a little less memorable than its predecessor.