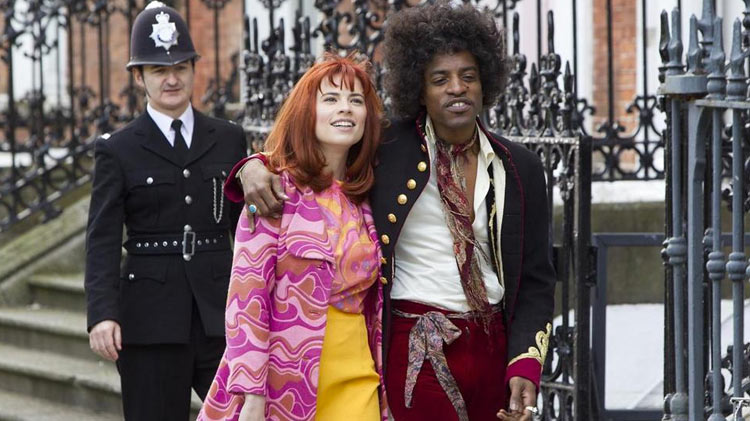 What do you do with a good film based on bad information?

When I first saw “Jimi: All Is By My Side” at the 2013 Toronto International Film Festival, I was captivated by writer-director John Ridley’s novel approach to the rock bio, a notoriously hide-bound genre. Avoiding the usual cradle-to-grave panorama, Ridley — who won an Oscar earlier this year for writing the “12 Years a Slave” screenplay and whose last film as a director was 1997’s “Cold Around the Heart” — focuses on the period from May 1966 to May 1967. In those 12 months, Jimi Hendrix went from being an unknown R&B guitarist in a New York bar to the psychedelic toast of London; the film ends as he heads off to the Monterey Pop Festival, where he will light his guitar on fire and go supernova.

It’s a great idea: a portrait of the artist on the rim of greatness. “Jimi: All Is By My Side” is told chronologically but impressionistically, and it sees the world from inside the head of its spacey genius star-child. André Benjamin, a.k.a. André 3000, half of the hip-hop/soul-funk duo Outkast, plays Jimi in a performance that’s both revelatory and enigmatic. The voice is a relaxed hippie drawl and the sentences never seem to fully connect to those around them — this Jimi is both more passive and more plugged in than other people. He doesn’t just make music; he speaks it, breathes it, lives it.

The drama of the movie lies in whether those other people will be able to make the star-child famous, if that’s what he even wants. “All Is By My Side” passes Hendrix off from Linda Keith (Imogen Poots), the posh English girlfriend of the Rolling Stones’ Keith Richards, who discovers Jimi in that NYC dive and gives him one of Keef’s guitars, to Chas Chandler, the Animals’ bassist who became Hendrix’s first manager, to Experience bandmates Noel Redding (Oliver Bennett) and Mitch Mitchell (Tom Dunlea). The movie also charts the musician’s romantic relationship with Kathy Etchingham (Hayley Atwell), whom Ridley presents as a fetching, foul-mouthed British dollybird who nags the guileless Hendrix until, one day, he beats her face with a telephone receiver.

Here is where “All Is By My Side” runs into trouble. The real Etchingham has said, forcibly, that this didn’t happen — not the beating nor her subsequent attempted suicide, shown in the film. Etchingham has told the British press that Hendrix never once touched her in anger; that the story comes from a 1974 biography by one of Hendrix’s old bandleaders, Curtis Knight, that was almost immediately discredited in court; that she offered her fact-checking services to the filmmakers and was repeatedly rebuffed.

It’s also worth noting that the story hasn’t surfaced anywhere else, and that the author of a 2006 Hendrix biography maintains he interviewed more than 300 sources and never once heard evidence of Hendrix acting violently toward women. Even if the issue weren’t a subject of immense cultural concern at the moment — finally — this scene and its aftermath would tip the movie on its side. Ridley films it with the brio of a Scorsese; given what he’s shown us of the musician, the beating seems to come out of nowhere and lead nowhere.

The irony is that “All Is By My Side” casts a thoughtful spell in spite of — or is it because of? — its refusal to “solve” the mystery of its subject in traditional terms. The movie starts with Hendrix dropping acid and it feels a little trippy itself, like a fantasia on the theme of Jimi. Is that why Ridley feels he can play fast and free with the particulars?

In the few places where the movie touches on class and culture and (most of all) race, it comes into focus. A scene of Hendrix making a trans-Atlantic call to his father is like a conversation between a broken American past and a boundless interstellar future; when a London Black Power leader (Adrian Lester) tries to convert the guitarist to radical politics, his pitch slides off Jimi’s gently firm humanism.

One other thing to point out about “All Is By My Side,” and for many people it’ll be a deal-breaker: There’s no actual Hendrix music in it. Ridley wasn’t able to get approval from the estate. Yet this matters less than you might think, since the film mostly takes place before the famous first recordings were made, the music casually spilling out from stages and living rooms and rehearsal spaces. Benjamin’s playing is overdubbed by longtime session guitarist Waddy Wachtel, who fakes the Hendrix sound well enough for these purposes. The momentous meeting of Hendrix and Eric Clapton (Danny McColgan) at the Central London Polytechnic club is a satisfying movie smackdown, one that really did happen.

All biopics lie, obviously, and the standard defense is that they do so in order to tell more dramatic stories and maybe to access greater truths. “All Is By My Side” fashions a bewitching mosaic, but through omissions and inventions, intended and unintended, it crosses the line that separates speculation from untrustworthiness. What it offers in return — the touchdown of a brilliant naïf — isn’t enough.

Next post 50th Anniversary of the Moog Modular Synthesizer