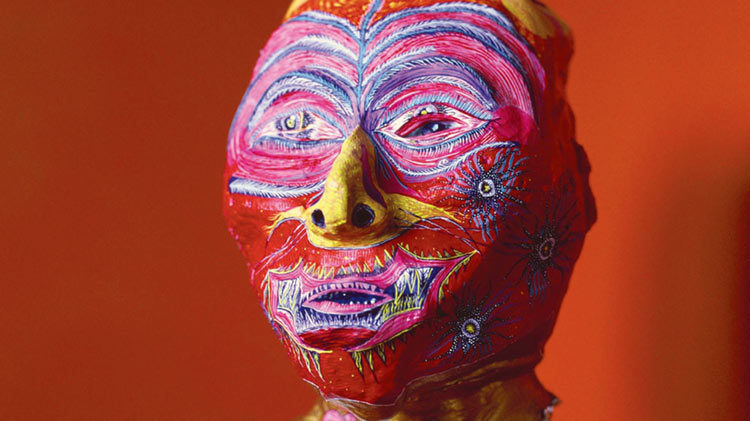 “For the moon never beams/ Without bringing me dreams,” goes one of Edgar Allan Poe’s most famous works, the poem “Annabel Lee”. It’s one of the blueprints for what would eventually (and often reductively) become the post-punk aesthetic of goth, and Brighton-based trio the Wytches have gulped down that influence greedily on their debut album,Annabel Dream Reader. The record is swamped in menace, murk, and star-crossed heartbreak. Singer/guitarist/organist Kristian Bell has a vision, and it isn’t a bright one; along with drummer Gianni Honey (whom Bell played with in the rickety, charming the Crooked Canes) and bassist Daniel Rumsey, The Wytches’ frontman cloaks himself in gloom. Beneath the trench coat, though, beats a love of grainy garage-punk, slapback-echoing surf-rock, and schoolyard-strength psychedelics.

Annabel Dream Reader is a monster-mashup of atmospheric proportions, and that works to their benefit, at least musically. “Beehive Queen” is a fetching shambles of a song, teeming with subaquatic twang and Bell singing in a strange, psychosexual vibrato. “Crying Clown” flirts with stoner-rock heaviness; “Weights and Ties” border on power balladry. There isn’t that much of a dynamic inherent in the Wytches’ hybridized sound, but they maximize it. “Wide at Midnight” is a study in tangles and tendrils, full of little melodic licks and abrupt bursts of distortion and screams. Bell is an erratic songwriter, and that works in his favor; what could have easily been a myopic, compromised mess is actually a grab-bag of unhinged sonic surprises.

Bell’s lyrics, on the other hand, are more painstakingly considered—although maybe they shouldn’t have been. Annabel Dream Reader is a concept album, but the plot is as loosely formed as most concept albums, consisting mostly of repeated themes, linked images, and recurring characters. In that regard, the record mostly works; its arc—from ill-fated introduction to tragic epilogue—is solid, even if it adds little to the experience of actually listening to it. Where Bell falls flat is on the lyric sheet itself. Too much of it reads like a parody of notebook-scrawled, adolescent anguish,  if not flat-out doggerel. “I know you and I took the last of the light/ From a bulb that resembled a tear,” he sneers with metaphor-mangling glee on “Digsaw”. “Keep away from this active breeding/Of dogs like men of masculinity,” he all but babbles on “Wide at Midnight”, lines that transcend cringe-inducement, to the point where your brain might go on strike after hearing them.

The lowest lyrical point is “Fragile Male for Sale”— a song whose title alone is a linguistic misdemeanor— which proudly features the line, “You must be a dancer ’cause you’re dancing in me”. If that doesn’t reek enough of Moleskins and cloves, Bell goes on to inject “Summer Again” with bombs like “I undid your dress/ You climbed up my jeans/ We wept for each other.” He seems to be shooting for the mystique-soaked romanticism of one of his obvious idols, Jack White—the album was recorded by Liam Watson at London’s Toe Rag Studios, the producer and room behind the White Stripes’ Elephant— but this is some strictly Aiden-level cliché-craft. “Track 13” is the album’s final song, and its final line is “Stop reading me, Annabel”. If Bell were ribbing himself about how wretched his lyrics are, it’d at least be amusing, but that might be giving him too much credit.

Of course, Bell’s lyrics aren’t intended solely to be read off the page; they’re meant to be listened to with full accompaniment, and in that sense, he’s almost able to compensate for his own handicap. “Burn Out the Bruise” is built on a dark, whiplash drone as well as Bell’s spirited, mid-exorcism caterwauling; it’s enough to overshadow the fact that he’s singing drivel like “Your claws slipped through like I was made out of glue/ But it wasn’t enough to help you burn out the bruise.” That spirit is the key to the album’s charm; the Wytches’ willingness to hurl caution to the wind is exhilarating, even when it verges on the precious and cartoonish. Outclassed by their own ambition, the band has aimed Annabel Dream Reader toward the lofty heights of Poe’s glum, fog-shrouded majesty—and winds up hitting, at best, late-period Tim Burton.