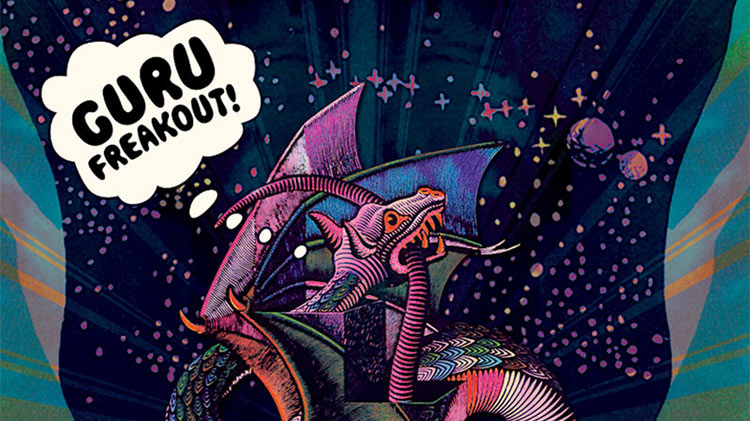 Los Angeles, CA – Climb aboard the Mothership for one of the wildest rides into the outer reaches of experimental music! Landing September 2, Mothership is the debut album from Guru Freakout, the thoroughly avant garde side project created by percussionist, singer, and frontman of the legendary Krautrock band Guru Guru, Mani Neumeier, along with über talented multi-instrumentalist/producer Jürgen Engler of German industrial band Die Krupps. With the help of bassist Scott Telles (ST 37), these two captains of the Far Out ride hypnotic, free-floating stoner rock grooves drenched in alien guitar fuzz on two epically long jams, the 30+ minute “Notre Dame (Mothership)” and the extended vinyl side-long aural hallucination “The Snows Of Mt. Bonnell,” that will have audiences shouting “Take me to your leader!”

Mani is an old friend of mine. Near the end of 2012, he came to visit me in Austin where I had organized a show for him to play. We also planned to do some recording for a follow up project to Cosmic Couriers Other Places, which was released on Cleopatra in the ‘90s. At the same time I was working with bass player Scott Telles of ST 37, and when Scott heard that Mani was in town, he wanted to meet him since he had always been a big fan of Guru Guru. So the three of us got together at his rehearsal studio and started jamming right away. We had a great chemistry, so we decided to record a few tracks with a little digital recorder, and also at Ohm Recording Studio. When we listened to the tracks later, we realized that we had some really good material that should see the light of day, and so those recordings became the Guru Freakout album.

The music is built around Mani’s relentless weaving drums. The guitar – psychedelic, atonal, bluesy and aggressive. At the same time, the bass – thunderous, Lemmy-sounding, with the energy of Peter Hook. All these elements combined to make for a very unique psychedelic experience…It’s Guru Freakout time!

Fans of Guru Guru and experimental, improvised music will not want to miss this very special album. The CD version includes exciting bonus tracks of rehearsal recordings that give an early peak into the makings of one of the most adventurous musical collaborations in recent memory!