Music That Changed My Life 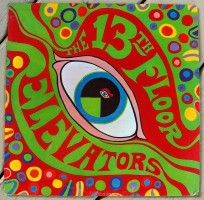 When people think of psychedelic rock music, they think of the late 60s, paisley shirts, Woodstock festival and hippie counterculture, yet it was an album in particular from 2012 that kick started my fascination with the genre. It wasn’t my initial introduction to it, I had heard and enjoyed music by the Jimi Hendrix Experience, the Flaming Lips and a few albums by the Doors. It was Tame Impala’s Lonerism album that got me hooked on psychedelia. A year late to the hype, I listened to it in mid-2013. I was aware of the acclaim surrounding it so I decided to give it a spin. Upon first hearing it in full, I noticed the sweet, poppy, sunny melodies combined with mesmerising guitar lines and spaced out drums that propelled it to another level. The public may be more familiar with the brilliant singles of ‘Elephant’ and ‘Feels Like We Only Go Backwards’, but it was tracks such as ‘Apocalypse Dreams’, ‘Mind Mischief’ and ‘Keep on Lying’ that surely captured my attention. It’s a record reminiscent of later era the Beatles at their upmost psychedelic and the out-there pop of early Pink Floyd, yet the music was also supplemented by synths and hazey shoegaze-esque guitars which gave it a refreshing and updated take to the 1960s sound. The album was recorded near entirely in frontman and producer Kevin Parker’s home studio in his native Australian city of Perth, a possible reason for why it’s music that perfectly soundtracked my summer. After listening to their previous efforts, ‘Innerspeaker’ and their self-titled EP within a matter of weeks, the band’s music successfully fashioned my keen interest in psychedelic music.

I became absorbed in all types and variations of psychedelia, past and present. Whether it be psychedelic rock, the blissful melodies expressed in psychedelic pop, the fuzz of stoner rock groups such as Kyuss or the updated sounds showcased in neo-psychedelia, I wanted to explore as much of it as possible.

I love the way psychedelic music has the ability to be accessible and popular whilst also retaining a sense of eclecticism and experimentation. Melody can be combined with elaborate, fuzzy guitar techniques, surreal lyrics and unconventional instrumentation which create a truly interesting listening experience.

Many discoveries were made through listening to acclaimed artists or music that had been recommended to me such as the Zombies, The Brian Jonestown Massacre, Spacemen 3 and the infamous Nuggets Artyfacts compilation, featuring garage rock singles compiled from the 60s that subsequently influenced punk rock.

The new found curiosity of the genre cemented my love for the Beatles psychedelic pop moments featured in the ‘Magical Mystery Tour’ and ‘Sergeant Pepper’s Lonely Hearts Club Band’, in addition to discovering lesser known artists such as Spirit, Kaleidoscope and Nottingham’s very own: The Soundcarriers. It even influenced me to start record collecting.

I love the fact that psychedelic music is blooming and continuing to develop due to a diverse amount of innovative psychedelic-tinged bands exploring established genres. Present day groups such as Toy are significantly influenced by Krautrock, Goat feature African rhythms, Warpaint showcase their moody post-punk influences and the Wytches create a cocktail of garage rock, surf rock and The Cramps/The Birthday Party influenced noise. Other notable contemporary acts include Animal Collective, The Black Angels, Unknown Mortal Orchestra and Foxygen. Overall, Tame Impala crucially influenced my music taste and continue to be one of my favourite and most frequently listened to groups. I was lucky enough to see them perform at Manchester’s Albert Hall cathedral last summer, becoming one of the most memorable performances I’ve witnessed due to the church setting, brilliant improvised song variations and the mind-expanding visual projections. The band are releasing their third album later this year which is being highly anticipated by fans such as myself and just last week they showcased their hypnotic new near 8-minute long single ‘Let It Happen’.