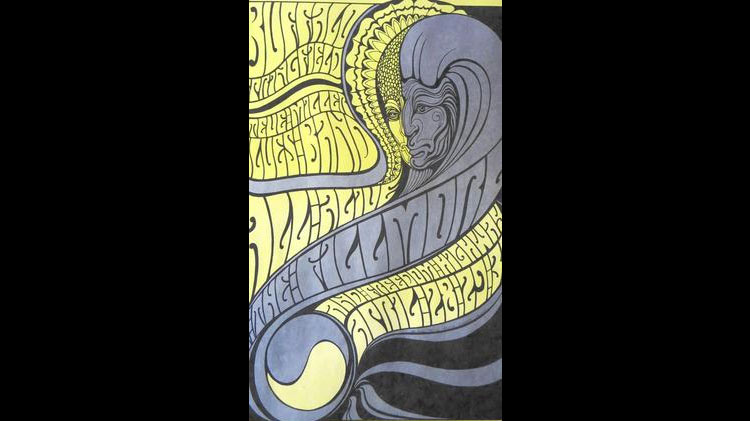 An exhibit at The Lily Pad in Willimantic is a trip backwards, to a time of concerts by bands like Mott the Hoople, Brotherhood of Light, Humble Pie, Quicksilver Messenger Service, Canned Heat and Country Joe and the Fish. “They’d put up posters and they’d get stolen, so they’d run up another batch, and they’d get stolen,” said Bob Benjamin. “They were serious art, but they were meant to be temporary.”

Benjamin and John Nicol, both of Lebanon, own the exhibit’s groovy artworks, which were created from 1966 to 1971 by a few artists whose works were meant to visually conjure up the experience of taking LSD. “The artists were doing with their art the same thing that musicians were trying to do with their music,” said curator George Jacobi, who contributed his own Woodstock poster and ticket.
Fonts that are almost impossible to read up-close, jarring color combinations, freaky image juxtapositions and lettering that twisted around in mind-bending swirls were typical of these full-sized posters and smaller postcards which became iconic of an era. “It’s like you’re tripping,” said Benjamin. “The blues and reds dance and you can see patterns and messages inside the patterns.”

Wes Wilson borrowed his legendary font and the images-against-lettering layout style from the late-19th century Viennese Secessionist art movement to create advertisements for San Francisco shows by Buffalo Springfield and other bands. Victor Moscoso, who studied under Josef Albers at Yale, riffed on his mentor’s emphasis on color to create eye-straining lettering in painfully bright hues that require several minutes to decipher. David Singer framed bizarre, unexpected collaged images with geometric-inspired fonts, in a style inspired by Magritte and Max Ernst. Stanley Mouse and Alton Kelley created one of the most legendary psychedelic posters of them all, the Grateful Dead’s skeleton-and-roses. Other artists in the show are Rick Griffin, Bob Fried and David Byrd.

The posters were so reflective of the psychedelic ethos, Benjamin said, that often they negated their purpose as advertisements. “If you look at it quickly, you can’t read it, which is a funny thing for a poster that’s supposed to convey a lot of information,” he said.

FLASHBACK: PSYCHEDELIC ROCK POSTERS will be at the The Lily Pad Gallery, 34 North St. in Willimantic, until March 31. Opening receptions will be March 12 and 19 from 5 to 7 p.m. At the March 19 reception, “Magic Trip,” a documentary on Ken Kesey and the Merry Pranksters, will be shown. lilypadart.com.