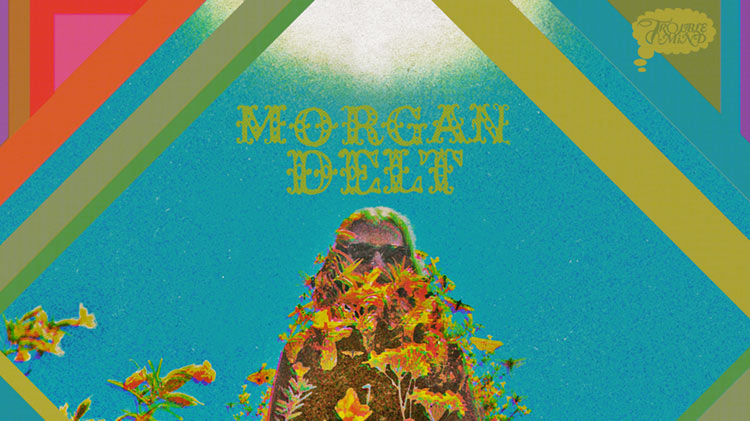 Available on: Trouble in Mind

Sorry to walk straight in and piss in your Kool Aid, but is there a genre out there in 2014 that sounds less transportive than psychedelic rock? For the most part, the recent crop of psych bands sporting the usually clichéd signifiers – thrifted paisley shirts, lava lamp visuals, lyrics a warm stream of whimsical gobbledegook – is about as earthbound as it gets: a once-psychoactive formula rendered depressingly inert.

There are exceptions to this rule, of course. Ty Segall’s finer records break on through to the other side thanks to steamroller riffing, in-the-red production, and the sense that he’ll torch any convention if it helps him succeed. And then there’s Morgan Delt. A relative newcomer, Delt is a Californian of authentically fried appearance with just one tape – the excellently named Psychic Death Hole – to his name. This debut album proper, an 11-track collection on the Chicago imprint Trouble In Mind, takes something from the Ariel Pink school of outré production, although Delt is quite obviously on his own trip, and you could just as easily work him into a lineage that stretches from The Red Krayola and West Coast Pop Art Experimental Band through to psych-influenced beatmakers such as Edan, Gonjasufi and The Gaslamp Killer.

Certainly, the music on Morgan Delt feels untethered from rock music’s more hidebound convention. The percussion is low in the mix and the bass way up, giving the songs a molten, fluid quality. The parts themselves, however, are guided by an erratic intelligence, with instruments – tabla drums, scorching fuzz solos, baroque guitar passages – blossoming brightly in the mix before withering away when their part is complete. At its most abstract – see ‘Make My Grey Brain Green’ – it feels like four or five different songs bordering on one another, the shift between each masked by billowing clouds of echo and feedback.

Such production trickery conspires to create a pretty spooked atmosphere. On ‘Barbarian Kings’, Delt sounds slyly malevolent, a goblin prince holding court in a dream palace of whooshing echo and rococo guitar filigree. But Delt has a good command of moods, whether conjuring a prickly melancholy on ‘Sad Sad Trip’, or concluding on a more straight euphoric note with the angelic chorusing of ‘Main Title Sequence’.

“I think we’ve become unstuck in time and everything is going to happen all at once from now on,” says Delt of his approach to music. In his hands, though, this isn’t an excuse for stodgy retromania; more a call for a return to psychedelic first principles, a road map to a music built out of sensory alteration, strange temporal shift, and eternal high times philosophy.