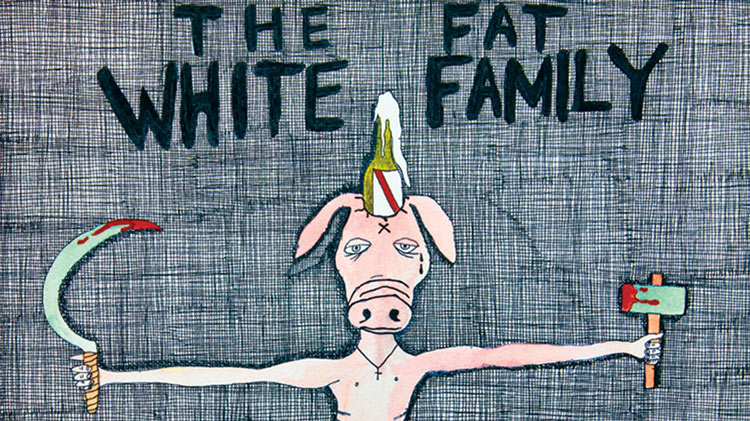 
Fat White Family sound just like they look—diseased, drug addled, utterly corrupt. The fact that they live above a London pub that stages exhibitions of rectal hand insertions, all while serving Sunday lunch to families, is an almost too-perfect addendum to their bio.Champagne Holocaust is the band’s debut album, a no-budget affair originally released onBandcamp and now getting a belated North American release after gaining a swell of attention in the UK. The nucleus of the six-piece band is two Northern Irish brothers, Lias and Nathan Saoudi, plus guitarist Saul Adamczewski, formerly of failed indie-punk outfit the Metros. If the album sounds like it cost about 10 of their English pence to record, then it probably did—but that’s all part of Fat White Family’s squalid charm, where rampant idiocy, intelligence, and deranged humor combine.

A cursory look at this band’s early press leaves little doubt that they know how to play the game, with one attention-seeking spectacle after another giving them all the scrutiny they need. Bodily fluids gush forth from the stage when they play, their manager is a tweed-clad fellow named Robert Rubbish, and they even gained note for a mundane stunt to mark the death of Margaret Thatcher. It speaks volumes for how exhausted the corpse of rock & roll is that such antics can still prick the attention, but at least Fat White Family appear to be as genuinely unhealthy and depraved as their records and shows suggest. They’re even topical, with one of their best songs, “Cream of the Young”, taking an unflinching approach to pedophilia, just as their country is sinking in a mire of celebrity related scandal relating to the topic.

It’s unlikely that Champagne Holocaust will be the album Fat White Family is best remembered for—this is the shambolic beginnings of something, full of directions tried and discarded and barely fleshed out. Lias owes a huge debt to Ben Wallers of Country Teasers for both lyrical inspiration and execution, plus a dose of Mark E. Smith and, perhaps more surprisingly, a soupçon of blue-eyed funk and the wistful psychedelic folk of Shimmy Discoutfit Bongwater. It’s distinctly backward-looking in outlook and sound, but that scarcely matters when the force of Lias’ songwriting obliterates the indie template they often take as their starting point. “Who Shot Lee Oswald?” amusingly imagines a series of culprits for the title’s crime, including Andy Warhol and the Velvet Underground, and gloriously devolves into sonic and lyrical chaos that’s just on the right side of stupidity. “Was it a secret government within the American government?” Lias asks at one point.

The place Fat White Family are coming from is just as confusing as the stylistic turns this record takes. They’re part drug addled lunatics hell-bent on blocking out the world, part angry Situationist operatives looking to kick up a shitstorm of trouble as the world disintegrates around them. If contemporaries such as Sleaford Mods also find humor and anger in the wider state of things, Fat White Family are just as likely to turn everything inward and examine their own failings. “If my mind was clean I’d be fine,” is a key lyric on the raggedy “Borderline”, but instead, we get a distinctly unclean vision of life, with Lias at his best when depicting sordid sexual encounters. Most of those gain a grubby strength from the minutiae he picks up on—the “five sweaty fingers on my dashboard” in his paean to car fellatio, “Is It Raining In Your Mouth?”, being his greatest chant-along moment to date.

In some ways it’s fitting that Champagne Holocaust can’t hold together as a coherent piece, especially when the primary working mode of this band takes disarray as an important requisite to function. The back half is especially weak, leaning into cheery, jangly guitars that don’t have a natural place (“Bomb Disneyland”) and redundant Syd-era Pink Floyd pastiche (“Garden of the Numb”). This version of the record wisely adds one of their strongest moments, “Touch the Leather”, as a final rallying call, with Lias again immersed in a pit of sexual degradation that appears to be the best reflection of his naturally soiled state of being. The video for the song—Lias, missing teeth, his face wrinkled beyond his years, mouthing words in slow motion while his brother moons the camera—illustrates the mix of low-level living and base humor this band has sunk into. It’s not pleasant, maybe not even relatable for many, but it works simply because it’s so vivid in its depiction of a life permanently on the cusp of falling apart.