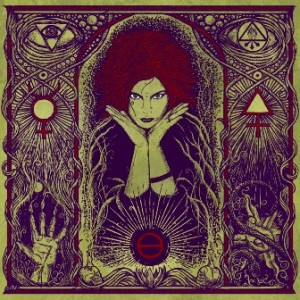 The last few years have seen a resurgence in low-fi Seventies-style Heavy Metal. Even better, much of it is full of occult references and musical callbacks to 60′s Psychedelia and even surf-rock. Many of these bands are also fronted by extremely talented women with some of the best pipes and song-writing chops in the business.

Heavy Metal loves dividing its self up into dozens of tiny genres. Many of the bands featured in this article are often labeled “doom metal” but I prefer another name . . . . Witch Rock! Most of these bands are not practicing occultists, but I’m not listening for esoteric insights. Songs about Lucifer can be a lot of fun, like a good horror movie. Occult-themes also play into the whole Seventies-feel present in the music.

The bands featured here don’t just play lip-service to analog recordings, many of them are big supporters of the vinyl revival, along with their fans. This is the kind of music that screams for a (record) needle and a turntable. Sine it’s a style of music meant for vinyl it also makes for great holiday gift-giving. 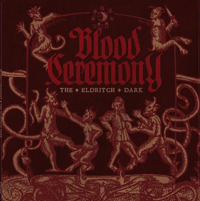 I’m sure people have been using the term “Witch Rock” for decades, but I first came across it as a descriptor for the band Blood Ceremony. I realize the name is kind of creepy, but Blood Ceremony has more in common with Jethro Tull than Slayer. The band is just as likely to unleash a flute solo in the middle of a song as they are a guitar solo. Most of their lyrics are full of occult cliches and horror movie references (including a great one to The Wicker Man called Summerisle), but their first two albums also feature some awesome “dance around the cauldron with Pan” tuneage.

Their third album, The Eldritch Dark is their best, and marks a change in style. While their first two albums were mostly heavy affairs, this third record is just as much Fairport Convention as it is Black Sabbath. The lyrics are witchier than ever too, and lead singer Alia O’Brien holds it altogether with charm and sneer.

Essential Album: The Eldritch Dark Other albums: Living With the Ancients, Blood Ceremony 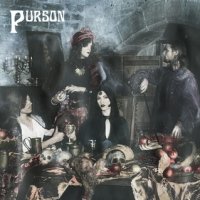 The most technically proficient of all the bands listed here might be England’s Purson. The band takes its name from one of Hell’s most powerful demons (Purson), but there’s nothing demonic about the band. If anything lead singer and song-writer Rosalie Cunningham is downright angelic. Weaving Beatle-esque harmonies in and out of big rock riffs and psychedelic sound collages Purson has a sound all their own.

Purson is the complete package, and that package comes with a sense of style that seems directly inspired by Alex Sanders. Despite the demonic name Purson rarely dives into the Satanic-side of the musical pool, instead Cunningham’s lyrics touch on a variety of topics. The band’s latest EP, In the Meantime, includes chanting of “do what thou will” and the line “Goddess of the moon teach me your ways for I must have him soon . . ” Cunningham is so supremely gifted that I have this fear that she’s going to leave the world of Witch Rock before she really gets started. Let’s hope that doesn’t happen.

Essential Album: The Circle & The Blue Door Also available: In the Meantime (EP) 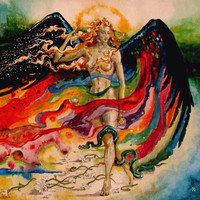 Despite the rather goofy name Finnish rockers Jess & The Ancient Ones are the real deal, and it all starts with the soaring vocals of front-woman Jess (just one name, like Madonna or Cher). What a set of pipes on this woman! She’s more Janis Joplin than nightmare and her voices fuels her band like oxygen fuels a fire. Musically the band is all over the map too, with psychedelic influences and musical breaks that sound like a cross between surf-rock and the theme to The Munsters TV show.

Jess & The Ancient Ones – Astral Sabbat

I was hooked the moment I heard Astral Sabbat from their EP of the same name. Astral is the band’s second project and represents a real leap forward from their still strong self-titled debut. Lyrically they operate with a large dose of Devil-kitsch, but there’s just enough “other” in there too that they don’t get too bogged down in it. Tunes like Twilight Witchcraft from their debut provide a pretty rocking ritual accompaniment. I just saw this band open up for King Diamond over Halloween-week and they put on a good show, and Jess just kills it. This band is worth listening to just for her huge voice.

We now interrupt the psychedelia and organ to bring you Germany’s The Oath. Unlike most of the bands featured in this article The Oath owes more to Motorhead than Jethro Tull, and that’s totally cool. Sometimes you’ve got to bang your head a little bit. The Oath relies a bit too much on the cliche-Devil lyrics, but the music pulses so hard and heavy that it’s easy to overlook. Guitarist Linnéa Olsson is a monster in the tradition of Tony Iommi, but like the master shines away from heavy riffage too.

Sadly The Oath broke their promise just as they were getting started. Sometimes a band is more shooting star than planet, such is the case of The Oath. Just two weeks after releasing their debut album this past April the band announced its break up. Lead singer Johanna Sadonis left fans with this cryptic message after the break-up: “The Oath, as we know it, is dead. The constellations are shifting once again. The morning star returns at dawn.” Hopefully this means she’s going to continue on with a new line up. The songs on their debut are too good to never be played live.

Essential (and only album): The Oath

Americans can do Witch Rock too, and America’s most popular occult-infused band is probably Madison Wisconsin’s Jex Thoth. Like Alice Cooper (band) before them Jex Thoth is the name of both the group and the lead singer (Jessica Bowen). It makes sense since Thoth (Bowen) is the main attraction. Her voice soars with both sweetness and menace, and the effect is a bit hypnotizing.

Jex Thoth – The Places You Walk

The bands 2008 self-titled debut was a sludgey soup of heavier riffs that sounded like it had been recorded underwater. (In this genre that’s not always a bad thing). 2013′s Blood Moon Rise is a bit more melodic and often sounds like a waking dream. Lyrically Jex Thoth can be dark, but they don’t indulge in the silly Satan references that keep many from listening to bands of their ilk. 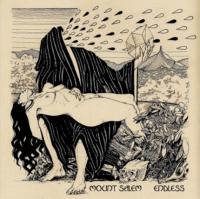 Chicago’s Mount Salem has been in constant rotation at my writing desk since discovering them a few months ago. It’s not the most original thing I’ve ever heard, but the guitar is heavy and the vocals of Emily Kopplin are divine. The opening track of their debut album (Endless) is a series of sonic peaks and valleys that captivate and stun at the same time. Embarrassingly I often find myself playing air guitar while listening to Mount Salem, the riffs and thumping drums are everything I want in a heavy style band.

This band is often compared to Black Sabbath, and with good reason. Unlike Purson or even Blood Ceremony the “heavy” is in full effect here, and Kopplin’s vocals are rather-Ozzy like (but much much better). More horror movie than full out Satanic force Mount Salem is a whole mountain of doom rock awesomeness. Gods is this a freaking great band! (Once I put on Endless I’m trapped in it for a solid hour or so.)

Essential Album: Endless (Endless was originally released as an EP in 2013, but was reissued this year with extra tracks). 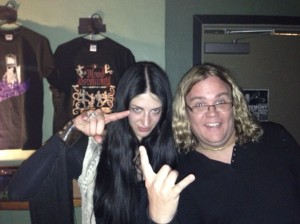 Many of the North American bands included in this article tour with some regularity. If they end up near you go and support them, it won’t cost you much either. Unless they are opening up for somebody these bands are all playing club shows that cost all of twenty bucks to get into. Blood Ceremony was nearby last Spring and I got out of that concert spending a fraction of what I would at a big arena show. Plus the music is better and the bands are easily accessible. Blood Ceremony deserved a giant line of adoring fans, instead they ended up mostly with my buddy Matt and I. (Yeah, that’s totally me raising the horns with Alia O’Brien, and I’ll totally fess-up to my giant crush on her.)

Advanced Studies: I’m just scratching the surface with this article, there are lots of other great bands out there similar to the ones written about here. The Devil’s Bloodand Witch Mountain, and Windhand nearly made this article, and there are a lot of cool bands worth checking out that don’t have the female vocals that so enthrall me.Uncle Acid and the Deadbeats, Horisont, and Year of the Goat are all worth your time.

Jason will be presenting a workshop entitled Heavy Metal and the Occult at both thePantheaCon and ConVocation gatherings in 2015.