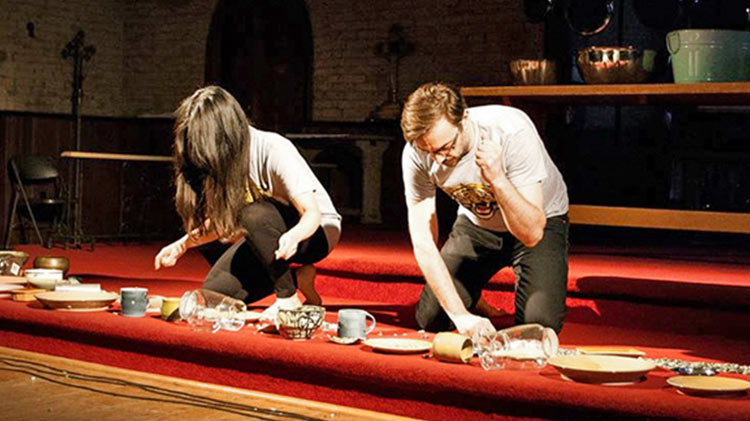 The top venues for experimental music in Toronto are as offbeat as the shows they host. From a church dedicated to avant-garde programming to cozy/cockroach-inhabited second floor walk ups, experimental music makes its home where it can in a city of condos and $9 smoothies, er, juices.

Out of necessity, noise, improv, drone, and weirdo gigs galore pop up at any venue that will open its doors to the less-than-musical, from bars to living spaces. Fringe events happen everywhere from Jam Factory (current home of Feast in the East) to Holy Oak to The Garrison to Wychwood Barns (not to mention the odd under-the-bridge show). Few venues in the city make a go of it hosting even semi-regular experimental shows, so kudos to anyone who’s ever said “sure, why not” to a post metal-gaze modular noise jam.

For those seeking disharmony and the challenges that accompany it, here are Toronto’s best experimental music venues.

The Music Gallery
In a town dominated by musicians looking make quick dough writing commercial-ready indie jingles and playing to halls of young adults who just showed up for a free beer, the Music Gallery has emerged as Toronto’s most established voice in the experimental and sound art community. Tucked away in a modest yet lovely downtown church, the acoustics are great, minds are open, and the vibe is relaxed (drinks in the courtyard!) yet reverent to the art. They also host Toronto’s annual X Avant New Music Festival each fall.

The Tranzac
Oh, the stories the carpet in the Tiki Room could tell. Named by Nadja as Toronto’s best venue (not great enough to keep the world renown duo in Toronto, unfortunately) this multi room and multi use space run by the Toronto Australia New Zealand Club (yeah, random) has hosted some of the city’s most memorable experimental shows including Bummer in the Summer and the Nihilist Spasm Band. Without the tiny, casual bar room in front many fringe artists would find themselves with nowhere to play. The Tranzac also houses the Toronto Zine Library.

Double Double Land
Few DIY spaces experience longevity, but after four years hard-to-find (up the alley and up the stairs) Double Double Land in Kensington Market have proved they have all the sugar and caffeine it takes to create a sustainable hub for extra-non-commercial concerts, dance parties, and art events. Few Toronto venues deliver quality programming as consistently: at DDL, whether an event is jammed to the point of heat stroke or sparsely attended, one won’t soon forget it (personal fave: Angels in America, 2011-ish). It’s also a good spot to shoot music videos.

Array Space
If there is such a thing, Array is a home for Toronto’s more classic avant-guard. The studio space on Walnut hosts low key performances, workshops, and jams. They were one of three Toronto venues to participate in Weird Canada’s Drone Day, but the ship is run so tightly that when I showed up late, the music was already over. Rare form.

Geary Lane
It may look suspect to include a space officially open for less than an entire summer, but such is the lifespan of the DIY venue. As Tad Michalak (Feast in the East) put it (shout out time): “it’s really hard to keep these venues, often DIY ventures, alive… Teranga when it existed was a real hub, so was Korova Milk Bar, Jeff Garcia’s Earthship, Somewhere There [now a transient collective], Placebo Space [now inEtobicoke].” The vast warehouse space (with swanky upstairs patio!) aims to de-sketch-ify the genre, with founders Man Finds Fire committed to supporting outsider art.

RATIO
Officially opening shortly after Geary Lane (as in, last month), low profile Ratio is located in Kensington Market in a second floor space that feels as homey as Weird Canada’s shortly lived Infinite Library. They’ve only hosted a few shows so far, but see above re: ephemeral venues and check this one out while you can. The vibe is ideal for detail-oriented music, with pillows on the floor, benches along the walls, and a relaxed but serious appreciation for live performance – even if it is sometimes just an artist turning dials, brow furrowed