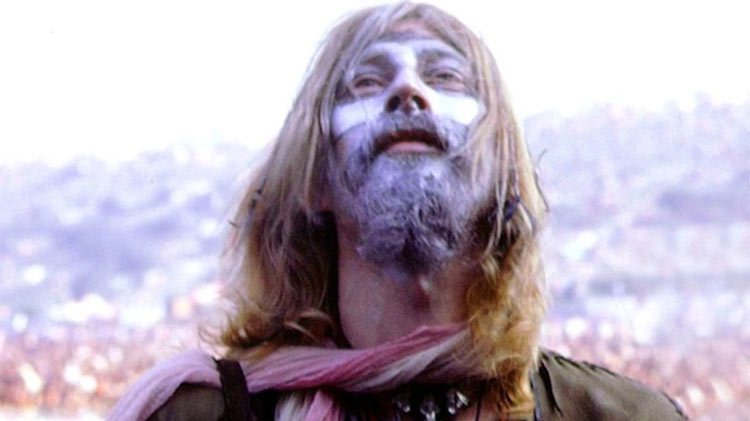 Singer, flautist, sax man, and all-around musical shaman Nik Turner brings his incarnation of pioneering British space rockers Hawkwind to LaFayette, Ga., tonight (Fri., Sept. 5) to headline the first night of the inaugural Meltasia Music Festival. Even in his mid-70s, Turner still turns out majestic space rock, such as the group’s latest single, “Fallen Angel STS-51-L.” He keeps Hawkwind’s cosmic vibes flowing with a younger lineup that pays homage to the group’s sci-fi rock legacy featuring guitarist Nicky Garratt and drummer Jason Willer, both of whom come from the UK Subs, bass player Bryce Shelton, and keys, synth, and sound effects sorceress Kephera Moon. But as Turner explains anyone who’s ever been touched by Hawkwind’s music is a part of Hawkwind, and the band is all about having a good time, all the time.

I’ve seen you perform a few times; the first time was about a decade ago, when you were playing in a band from Atlanta called Spaceseed. Do you still play with them?

I actually bumped into John Pack at a festival in England, in the summertime. I was supposed to play with them but I didn’t get to the festival in time. I played the following day with a band that played my entire repertoire from Space Gypsy. I worked with John Pack a couple of times and did a couple of tours with him; it was all very enjoyable. He had a girl with him on tour called Galaxy Gal [Gal Axy] who played synthesizers. She was very entertaining and a lot of fun. We were on our way to do a bit in Chicago and as we were driving along the freeway there was a clunk and the back of the bus suddenly dropped down and we saw the rear wheel roll past us! Fortunately, we were able to pull over to the shoulder, though the wheel was blown to bits. It was quite hilarious and frightening. Fortunately, there was another band going to the same gig and we managed to get them to take me and the drummer to Chicago. We got to the venue and there were some friends of mine there. It was one of their birthdays and he had been playing bass with me previously. I got him to play bass and had another dude play guitar — we just sort of cobbled a band together out of the people who happened to be there, and we put on a really good show.

So it was a happy accident!

Yes! It was highly amusing watching that back wheel roll past us on the freeway. Spaceseed was quite enjoyable.

I saw you perform earlier this year at the Earl, here in Atlanta, with Nik Turner’s Hawkwind.

Yes. At the suggestion of the band’s original manager, who said that every member of Hawkwind should have their own version of the band. My feeling about Hawkwind is this: Everybody that’s ever been in the band is Hawkwind, as well as everybody who’s ever been touched by the band. I think it’s sort of a communal plane that is everybody’s. Everybody that is touched by it is welcome to be part of it. That’s my feeling. Unfortunately, Dave Brock has a rather different attitude. He sacked everyone from Hawkwind, including myself, and then there was nobody else in the band but him, from the original recording contract, which was originally signed by myself, Dave Brock, Terry Ollis, John Harrison, and Michael ‘Dik Mik’ Davies.

He trademarked the name of the band, and then when I went out with XHawkwind, with all the ex-members of Hawkwind, he sued me (laughing).

I think of Hawkwind as a community thing. It was an idealistic thing with alternative attitudes and alternative principles, and I think Dave dropped all of those things in favor of money. He can’t come to America, so I thought, since everybody who’s ever been in Hawkwind is Hawkwind, I’d be quite happy coming to American as Nik Turner’s Hawkwind. I want other people to come over here like Simon King, Alan Powell, Simon House, or Lemmy, and all have their own versions of Hawkwind (laughing).

I’m going my own way, gathering lots of friends, and having great times promoting the music, turning people on with it, and having people enjoy themselves immensely. Last night was fantastic, and I just have those old guiding principles of wanting every gig to be the best gig I ever did; and to be a healing experience for everybody. I’m finding this is working so I’m very happy about it.

For your current tour, are you playing new material, or is it mostly Hawkwind stuff from your time with the band?

Yeah it’s the same songs but I think we ought to do a bit more jamming actually. We’ve been doing some of the stuff form the original Space Ritual, and we’re doing a couple of songs from the Space Gypsy album. We do “Fallen Angel” and “Eternity.” And we’re doing a few other numbers from Space Ritual — “Space is Deep.” I don’t know if we’re doing anything else. I don’t remember; my mind hurts (laughs).

When we played in San Francisco, Jello Biafra sang with us. He came up on stage and we did “Ejection.” We also did “Orgone Accumulator” that night. We do different numbers depending on who’s with us, and we’re just happy to accommodate other spirits that want to get involved, have a good time, and be part of the show. I had met someone in Albuquerque who was a friend of Roky Erickson, but I lost the phone number somehow. I was hoping to get him to come down and maybe just be there, not necessarily perform, although he could have performed with us. I seem to remember once hearing a song of his that goes “I’ve been working in the Kremlin with a two headed dog,” and the riff was essentially the same riff from “Master of the Universe!” It would have been great to get him on board.

Can you tell me a little bit about how jazz, specifically free jazz, shaped your musical development?.
I’ve always been interested in free jazz — I learned to play the saxophone when I was about 17 years old. In 1968 I went to Berlin and I met all of these free jazz musicians who said that you didn’t need to be technical to express yourself, so I thought, “Oh great, I’ll play free jazz in a rock band.” That’s what Hawkwind was to me, just sort of having fun making a noise and expressing myself on an instrument. We put a record out. I used to go to a record shop in the West End of London and there was a guy working at the shop who said, “You can have anything you want for cheap!” And I said “Oh, that’s nice. Why is that?” He said, “Well, 90 percent of the people that come in here say they all want to play like you!”

I got voted number one saxophone player in Britain and number two in the world and thought, “Wow, that’s bizarre.”

I grew up on jazz like Charlie Parker, John Coltrane, and Billy Holiday. My mother played the piano, my brother played the trumpet, my uncle played the clarinet. I found it’s quite technical to play jazz so I thought I’d play free jazz and just express myself that way, and encourage other people to do the same.

I also encourage others to get on the stage with me and give them a spot to express themselves. I tell people what they must do is enjoy themselves and don’t give a fuck. They’re the only ones who know what they are trying to do so they are beyond criticism from other people. I had a band called Nik Turner’s Fantastic All-Stars, based upon the fact that everybody is a star. I always try to give people confidence and I encourage people to express themselves and feel good about what they do. I find that musicians appreciate a lot of free jazz, but it’s a bit beyond a lot of people. It’s music for musicians.

People appreciate the texture and the quality of the instrument when you’re playing a lead instrument. I find that lead instruments are very sexy. I love playing reed instruments, and very often I try to direct the music of the saxophone that I’m making with my tongue at the clitorises of the young ladies in the audience in order to connect with them. It’s the thought that counts really. If you put that into your philosophy and your message then you can create tremendous amounts of enjoyment for the young ladies in the audience. I think it’s a very natural thing. Music is a basic sort of truth and you can express yourself emotionally and speak to the instrument. I found that after some time and experimentation, suddenly finding myself trying to be technical, and play things in every key as fast as I can, and trying all this complicated stuff, that it became extremely satisfying. But I generally play for myself. I don’t necessarily play for other people, and that rubs off on others.

I find that people enjoy what I’m doing because I enjoy it and the more fun they have, the more fun I have. It’s an exchange of energy. I like to do stupid stuff. When I was in New Orleans I walked from the back of the audience playing “Yakety Yak” on my saxophone. I like that sort of thing, walking amongst the audience and feeling like your touching them and communicating musically. You can express all sorts of emotions like love and caring. I just really like to heal people.

You often talk about the healing power of music.

I went to Egypt and recorded flute music inside the Great Pyramids and found that having spent a lot of time inside the King’s Chambers and the Great Pyramids meditating, chanting, and playing my flute, once I came back to Britain I had this sort of healing power. Suddenly, I was able to heal people’s pain but I think everybody has that power. I did a question and answer for this documentary film called Do Not Panic about Hawkwind. People asked about my time in Egypt and I told them I found I had this healing power. A woman in the audience said, “I have this terrible pain in my back. Can heal me?” I said I could try. So I put my hands on her and thought about the Egyptian gods, the elements, and drawing healing energy from my body and transmitting it into hers. After about five minutes the women said, “Wow, the pain’s all gone!” I think that’s fantastic. It’s a gift and I’m just really happy to be able to share it with people.

Next post The Top 5 Experimental Music Venues in Toronto