The Horrors on Touring Experiences and Their Fourth Album 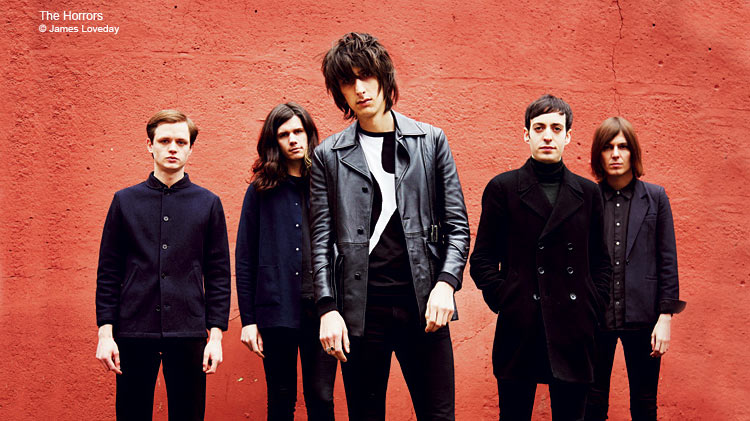 Somewhere there exists a John Denver song for the bizarre American life on the road that U.K. band The Horrors has experienced in their stateside tours over the course of nearly a decade.

“We were in St. Louis, and I was walking down the street with Joe [Spurgeon] and this 10-year-old pulled a gun out of his trousers and started waving it around. It scared the shit out of me,” recalls keyboardist Tom Cowan (who sometimes also goes by Tomethy Furse). There was also the time singer Faris Badwan was stranded at a 24-hour Walmart when the band’s tour bus unknowingly left without him. After biding his time reading one of theHunger Games books inside the store, the singer decided to start walking along a local freeway at 6 a.m. “On the way, I saw things I should have tried harder to avoid,” he says, like the woman with her arm stuck in a post office box and a man shitting outside a Starbucks. “I thought I had been introduced to America before that point, but now I know I didn’t really know it at all.”

The madness of the road has its method, though, says Cowan. “The people you meet, the bands you play with, the music you hear on that journey—all those experiences build up. And that in-between time before recording—that’s the space where the change happens.”

Change, in fact, has become a constant comfort for The Horrors by this point. When the five-piece (completed by guitarist Joshua Hayward, bassist Rhys Webb, and drummer Joe Spurgeon) released Strange House in 2007, their debut album driven by popular single “Sheena Is a Parasite,” they were swaddled in gothic garb and mired in a mix of New Wave and post-punk influences that together gave the appearance of a band of imitators rather than innovators.

Over the course of two more albums, 2009’s Primary Colours and 2011’s Skying, however, the band further refined their look and sound. They traded in the leather and loathing for more attuned psych rock, trance pop, and shoegaze elements that have made them Spartans of the millennial migration to a sharpened, prismatic style of production. All of these ingredients come together in uniform clarity on their newest release, Luminous, which the band regards as its hallmark album.

“It feels more complete and more competent,” says Cowan, who has a hard time coming up with the words to describe the album himself. “It doesn’t exist in words, I don’t think, but rather in sounds and abstract mental images like some sort of Technicolor explosion.”

For his part, Badwan says Luminous is perhaps the record he’s happiest with out of the band’s disparate discography. “We have short attention spans and like exploring. The whole point is discovery in some way. Trying not to beat sound to death is the main focus for us.”

The discovery period took shape over a three-year break between records. For the first time, the band enjoyed the freedom of breaking from the chains of imposed deadlines, and opted to self-produce the record from their own studio.

“I think previously in some small way we always had to make some form of compromise because of time and financial constraints, but this time any sort of deadline was only what we put on ourselves,” says Cowan. “We wanted to have more time and ultimately make the right record.”

For him, that meant finding the right equipment to develop Luminous‘ voluminous sound. Full of electronic flourishes and atypical rhythms, it’s the band’s most upbeat and danceable album yet, with tracks like the spacey, casino-crashing instrumentals of “I See You” and the pop blitzkrieg of “So Now You Know” living somewhere in the land of Gary Numan, James Bond, and Radiohead.

“I put together a modular synth recently—it seems to be the in-vogue thing for electronic musicians,” he says, laughing. “It was amazing, though, because doing so allowed me to free myself from the constraints that come with the designs of other people. There was freedom to make mistakes and be immersed in this weird power struggle between you and instrument because you’re not 100% in control, which is better because you can make sounds you can’t explain and can’t recreate, like personal snapshots in time that only exist once. I’m really into that idea.”

It was something Cowan first discovered when, as a teenager, he became obsessed with collecting vinyl, especially compilation albums he’d find at the local record store.

“When The Strokes first hit big, it set off this chain reaction in me to acquire all these American garage rock compilations,” he recalls, noting a particular affinity for Nuggets: Original Artyfacts from the First Psychedelic Era, 1965—1968 and The Definitive Story of CBGB: The Home of U.S. Punk. “All The Stooges and The Electric Prunes, The Seeds, Blondie, Talking Heads music, I fell in love with it. And even though it was defined as a ‘punk’ record, it all sounded different. It gave me a new view that music didn’t have to be so categorized into time, genre, or sound. All these sounds all worked together; it changed my perspective, as a kid.”

If you ask any of the other Horrors members, they’d have similar experiences. While Cowan and Badwan met at boarding school in a small fishing port town called Southend-on-Sea, Hayward, Webb, and Spurgeon would later bond with the two schoolmates over a love of collecting vinyl records. It was their first entry into music, in fact, since neither Cowan nor Badwan for their parts grew up in musical households.

“Music was introduced to me by my dad’s singing, and he is completely tone-deaf,” jokes Badwan, although the reverse psychology apparently worked, since both Badwan and his brother (Tarik Badwan, frontman of the band Loom) are both quite successful in their individual acts. Similarly, Cowan and his brother (Freddie Cowan of The Vaccines) found their own sibling success, also oddly kickstarted by their father’s talent, or lack thereof. “My dad was in a band when he was a kid, and I managed to track down a photo of him playing on the Internet,” he jokes. “But he never really shared that with us until we started to play, too.”

As a result, most of the band had little to no formal training, which has become one of the more enjoyable surprises as the band progresses. “There’s all these standard tricks bands use that are standard things if you study music, but we never did that, so we are just getting into those ideas now,” Cowan admits, like changing key patterns and sporadically putting in melodies where they might not otherwise belong. “The anticipation is being able to surprise people so they don’t know what’s coming in the song as it develops.”

Such as having an eight-minute track play unedited on the radio, as the band has done with newest single “I See You,” which has recently dominated U.K. airwaves. “When’s the last time that happened?” Cowan jokes, not immune to all the dedication the band has put into the album to get to this pinnacle

moment in their career. “You have to work hard at your craft for a while and then you start to do things that are as good as the reasons you got into the band in the first place…. It’s something we’ve discovered as we’ve grown up in this band,” he says, again relating it to the hours logged on those long, winding roads. “When you tour and see the world around you, it gives you a sense of your place and where you belong.” And for The Horrors, that’s pretty much everywhere.

[Note: This article first appeared in Under the Radar’s June/July print issue (Issue 50).]