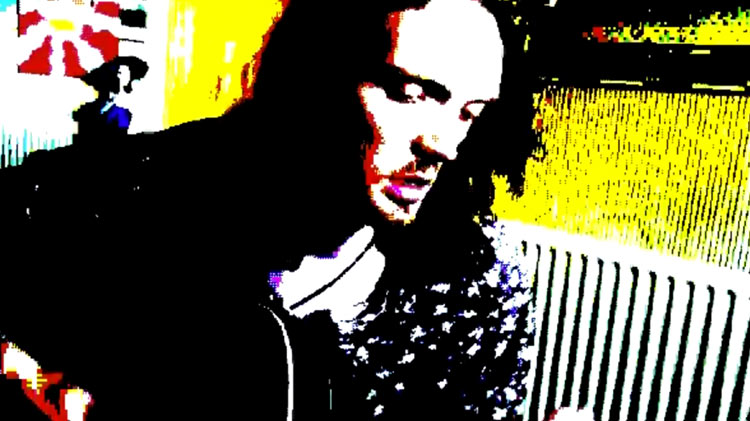 Al Hotchkiss has been creating some of the most fascinating, as well as coolest, new psychedelic folk rock out there today. This Edinburgh, Scotland native’s music is equally haunting and compelling, perhaps best suited for listening in the night time.

At the same time, Hotchkiss defines the modern independent spirit by regularly making his music available on the Internet as downloads and, by also creating unusual YouTube videos to accompany some of his fabulous songs. Starting out as a solo acoustic/electric artist, he also performs with Los Tentkills.

STEVE ELLIOTT: Al, you have a unique and original sound, which for lack of a better word I would describe as psychedelic folk garage. Labels can be a drag sometimes, or just plain limiting. How would you describe your music to folks who haven’t heard it yet?

AL HOTCHKISS: Yeah, you’re right about labels. There seems to be a lot of ridiculously drawn out genre listings going on these days — psychedelic, folk, rock, raga, punk from Mars. I guess it’s just a way of pretending what their doing is in some way original or new. I wouldn’t bother mentioning the surf rock aspect of it, because most people don’t know what that is without mentioning the name of Quentin Tarantino, little culture hijacking nerdlinger that he is. I guess, I would describe my music as melodic rock n’ roll. I’m a sucker for good honest melodies.

STEVE ELLIOTT: I find so many of your performances haunting and amazing, whether it’s an original song or an unusual cover version. What do you look for in a cover song?

AL HOTCHKISS: Again, probably the melody, or if I feel rather passionate about a song and it also seems like it would be a challenge to make it my own in some way or other. Anything that makes the hairs on the back of my neck stand on end.

STEVE ELLIOTT: My impression is that a lot of your music seems to be a perfect backdrop as night time music.

AL HOTCHKISS: I am a bit of a night owl, must be said. I’m much better in the dark.

STEVE ELLIOTT: Many of your songs have a wonderfully eerie, slightly creepy feel.

AL HOTCHKISS: I have a leaning toward that sort of thing. I like the feeling of being scared to a point. When I know it’s just a trick or a special effect. Music is good for that because, it fires the imagination in a more subtle way. Like the music from John Carpenter’s The Thing; that shit’ll make your spine jangle. That’s a skill I’d very much like to develop.

STEVE ELLIOTT: You’ve been involved in a couple of side projects, as well. One of the more intriguing is the Sugar Skulls, a group that combines poetry along with your music.

AL HOTCHKISS: My girlfriend is a very gifted writer of words and flowery language that is deserving of a back beat. We wanted to do something like Kerouac’s jazz albums. I think we managed it.

AL HOTCHKISS: May the forces of evil become confused on their way to your house.