This is another of those bands that are “new” to The Ancient One. This time, the band is Iluvatar, from Baltimore, who have previously released 3 albums, Iluvatar (1993), Children (1995) and A Story Two Days Wide (1999).The long gap from release No 3 to this new release, From the Silence, may well be a contributory factor to the title. There is also news that these early Iluvatar albums may well be re-mastered and re-issued. The band would fit into what is best classed as the melodic, symphonic progressive rock style, and they have been compared favorably with such acts as IQ, Pendragon and Arena.

Iluvatar is a 5 piece band with three of the original members still active in the band. The line-up is Glenn McLaughlin (vocals and percussion), Denis Mullin (guitars) and Jim Rezek (keyboards) together with Dean Morekas (bass, bass pedals and backing vocals), who joined prior to album No 2 being issued, and Chris Mack (drums and percussion) who joined just before album No 3 was issued. 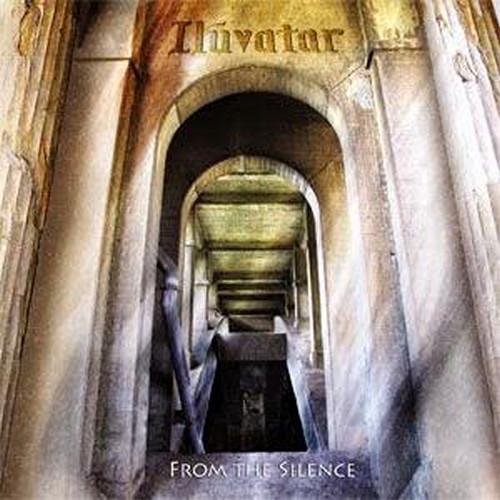 From the Silence is an 11 track album with a total running time of around 55 minutes. The opening, title track, is by far the shortest on offer at 0:53 seconds and track 5, “Across The Coals” is the longest at a few seconds short of 8 minutes. (7:56)

The opening, and title track, “From The Silence” (0:53) is merely a very short introduction to the main event. Very reminiscent of short wave radio snippets, it morphs into distant vocals behind some ominous sounding strings/mellotron. The following track, “Open The Door” (4:48) is certainly a shift from the ominous to the aggressive. There are terrific vocals from Glenn over a track that simply charges along with superb keyboards and jagged guitar riffs.

“Resolution” (7:03) accepts the baton readily and although there is a gentler start to the track, it builds until the heavy guitar riffs vie with the keyboards/strings/mellotron for air. Veering from the light to the dark, and back again, this track grabs the listener. The keyboard passage just before the 3 minute mark is majestic and evolves into a stunning guitar passage.

The extremely unusually named “Le Ungaire Moo-Moo” (3:28) is of a similar feel to the second track, with the mighty mellotron and guitar providing a dual attack on the senses. The jagged guitar backed by the solid bass and drums drive this track from start to finish. The tempo then changes completely into a symphonic style, touching on the pastoral at times, with “Across The Coals” (7:55). Melodic guitar, sympathetic keyboards and a crystal clear vocal, washes over you as you become immersed in the atmosphere generated by the music. Both “Favorite Son” (4:15) and “Between” (7:00) sit very comfortably with “Across The Coals” style, being similarly melodic, full of little hooks, acoustic guitars and haunting, ethereal keyboards.

The vintage keyboards and quirky time changes of “The Storm” (4:00) give the vocalist a bit more work to do, but Glenn takes it all in his stride. “The Silence” (6:21) has an amazing keyboard/ synth introduction and the overall feel of the track is very “spacey.” This track is a hugely atmospheric slab of progressive music.
The penultimate track, “Older Now” (3:19) is another shift in style. The track is melodic, with superb bass, clear vocals and those “comfortable” keyboards edging the track along.

The final track on From The Silence, “Until” (6:01) continues the melodic run with a gently building track that simply soars by the halfway point. There is a majestic soaring guitar in the second half of the track, as well as a false ending. Everything stops at 4:36 minutes, but bursts back into life at 4:49 minutes and simply flies along for the last minute and a bit.

Iluvatar was a complete unknown to me prior to receiving From The Silence for review, but after several listens to the album, I became very aware of having missed out somewhere along the line. Not knowing the previous albums, I cannot comment on whether this new album has shown the band evolving a style, but From The Silence shows real musical maturity, with each track expertly crafted, encompassing, but never imitating, the style of the bands mentioned in the introduction. This is a band which may have been “lying low” for several years, but have returned with something very worthwhile to say. Give From The Silence a few listens, notice the two stickers, “One to Buy” and “The Experience will last Forever,” and follow the instruction given by the former.

Key Tracks: Across The Coals, Between, The Silence

Tracks:
From The Silence
Open The Door
Resolution
Le Ungaire Moo-Moo
Across The Coals
The Storm
Favourite Sun
Between
The Silence!
Older Now
Until