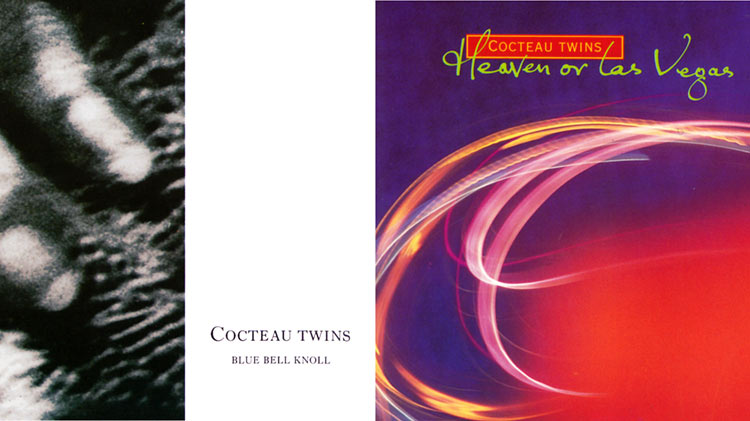 4AD recently reissued these two excellent albums by the Cocteau Twins on vinyl and in a way it feels like the timing could not be more pertinent. The band’s influence is evident everywhere from the keyboard-drenched power-pop of recent Beach House to the fizzing rhythmic synth-gaze of The Horrors’ latest. They’ll even be touched on in the eagerly anticipated shoegaze documentary Beautiful Noise later this year. Yet it’s almost impossible even now to view the band as nothing other than an idiosyncratic unit inhabiting only their own self-made soundworld. No artist has been able or even attempted to mimic their style; resting on Elizabeth Frazer’s seemingly wordless, melismatic vocals and guitarist Robin Guthrie’s maximalist approach to effects including flange, phase, chorus and delay that give the impression of an enhanced depth.

Cocteau Twins had spent most of the 80s progressing from jangly chamber pop to the deeply sensuous, abstract sound and aesthetic evident on The Moon And The Melodies, their collaborative album with minimalist composer Harold Budd. Yet 1988’s Blue Bell Knoll still feels like something of a stepping-stone. 4AD had suggested that Brian Eno produce the record, but the band spurned the idea, opting instead to build their own studio and produce the album themselves. This is clearly the action of a band straining at the leash to take control over every aspect of their sound. However it’s a decidedly front-heavy album, with most of the poppy big-hitters inhabiting the first side of the LP whilst a general sense of poor sequencing is evident. The languid stroll of ‘For Phoebe Still A Baby’ would have served better as a moment of afterglow towards the end of the work, whilst ‘The Itchy Glowbo Blow’ just sounds tired; an example of how insipid the Cocteau’s productions could sound without a decent tune to flesh it out.

Despite this there are moments of melodic immediacy and striking textural arrangements that make up for this. The opening title track introduces a jarring sense of menace rarely seen in the group’s work, with its foreboding keyboard loops and pillow-soft synth tones lending the track a weird mixture of pastoral airiness and tripped-out melancholy. One could argue that this sound predates Boards of Canada’s ruraldelic electronica by almost a decade; their combination of wavering guitar and synth tones and programmed, hip hop-like beats bears striking resemblance to their enigmatic countrymen’s uncanny soundscapes. The blissed-out, almost folky lollop of ‘Athol-Brose’ follows on nicely, but it all seems to lead up to ‘Carolyn’s Fingers’, that beautifully concise, naïve rush of psychedelic dance-pop. Their first single in the US, it marks the point where the Cocteau Twins decided to aim directly for the pleasure receptors; it’s nearly all chorus, with each bridge and verse only seeming like the prelude to each serotonin-gush of the central hook, Frazer’s soprano gliding ecstatically over the song’s lush production.

In the period between Blue Bell Knoll and Heaven Or Las Vegas the band seem to have captured the sense of blissful directness from ‘Carolyn’s Fingers’ and ran with it. Around this time bassist Simon Raymonde’s father died, and Frazer and Guthrie’s relationship came under increasing strain due to the latter’s addiction to drugs and alcohol. However it appears that their music became more ecstatic as the band itself became more fractious, and for that matter they do sound ecstatic in the narcotic sense of the word. Syncopated, thoroughly danceable beats underpin sensuously immersive synth textures whilst wordlessly rapturous, mellifluous vocals crest intensifying, hair-raising chord progressions. To hear this, along with the band’s default setting of programmed drums loops and psychedelic guitars, I’m convinced that this is the sound of a band well aware of the musical and chemical innovations going on around them at the dawn of rave in the UK, despite their stated insularity. Much has been made of My Bloody Valentine’s dance credentials but the case could also be made for the Cocteau Twins during this period, who for me are arguably at their best when at their most rhythmic and kinetic; see ‘Carolyn’s Fingers’, ‘Iceblink Luck’ and what might be termed the ethereal baggy of ‘A Kissed Out Red Floatboat’.

From the albums opening it’s clear that Heaven Or Las Vegas is a slightly more direct statement than Blue Bell Knoll. ‘Cherry Coloured Funk’ gets straight to the point, boasting a simple beat, a heavier bass sound, a minimal three chord hook and a gorgeous, melt-in-your-ear melody. You can even make out some of the lyrics this time around. Frazer’s voice seems to ache with some vague emotion, multitracked against itself to create a swirling, overwhelming effect. One might argue that the band’s songcraft also improved on this album, as the songs begin to mix major and minor chords to create a more tangible emotiveness. Guthrie increasingly uses his guitar tones to create leads as well as ambient sound-sheets, as in the sugar-crystalline, lazer-guided countermelodies on ‘Iceblink Luck’ that serves to further heighten that songs irrepressible, acidic positivity. The euphoric title track sees Frazer create another catchy hook out of a playfully eccentric vocal rhythm, coming off like some kind of angelic pub singer, whilst ‘I Wear Your Ring’ is arguably the first Cocteau Twins song to live up to all those Kate Bush comparisons with its digital keyboard washes and almost melodramatic delivery.

As someone who wasn’t even born until the Cocteau Twins were well into their decline, and benefiting with the critical distance that this provides, I find these albums to be the bands’ most musically exciting and rewarding, despite the flaws of Blue Bell Knoll. Heaven Or Las Vegas sees the realisation of the Cocteau’s years of nebulous experimentation realised into a full-blown collection of direct yet still mysterious pop songs, and places them deservedly in the tradition of beautifully weird, visionary Scottish musicians that range from the Incredible String Band to Ivor Cutler to Mogwai.

Next post Amazing Resonance Experiment – The Sacred Geometry Of Sound