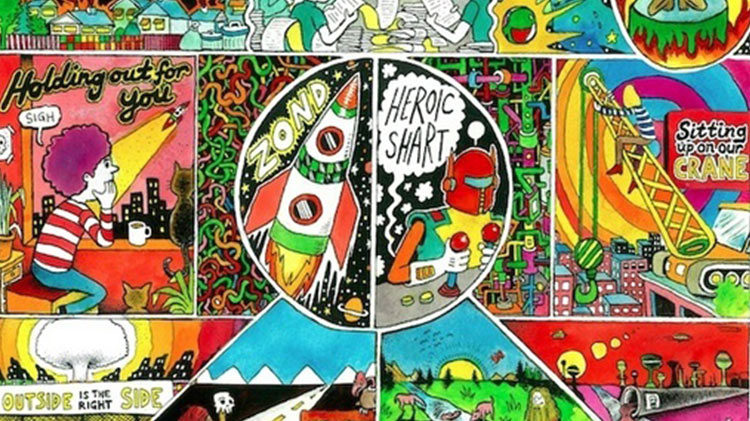 Having witnessed Pond play one of the most bombastic shows you could hope for back in their breakout year of 2012 (I remember managing to text my brother once another hoard of crowdsurfers had poured forth over my head to rather unashamedly proclaim that I’d just seen ‘the future of rock’n’roll’), procuring Beards, Wives & Denim, their album at the time, was an absolute must. The high-energy, wise-cracking demeanour that they’d channelled in the live arena transferred onto that record’s explosive arsenal of all-encompassing psych-rock numbers, sending you on a multi-coloured trip that you never wanted to return from (try ‘Eye Pattern Blindness’ for size). With such huge promise on both fronts, it seemed that existing parallels with fellow Perthians and musical brothers-in-arms Tame Impala would continue with Pond making a similar transition into the big leagues.

This momentum, however, stalled somewhat, as the solid yet unspectacular reception for fifth album Hobo Rocket in August 2013 instead established Pond as very much a cult concern. A disappointing outcome, perhaps, but whilst Kevin Parker is now off gallivanting with Mark Ronson and crafting even more mind-melting soundscapes for Tame Impala’s eagerly-awaited new record, Pond have diverged from the spotlight that they fleetingly shared to tread their own path.

With lead vocalist (and former Tame Impala bassist) Nick Allbrook solely concentrating on all matters Pond for the first time, the four-piece that could easily win the part as The Mighty Boosh’s house band set about writing what’s been purported to be their ‘most striking statement to date’. And over its 45-minute, nine-track duration, Man, It Feels Like Space Again is certainly a curious proposition. Veering to and fro between traditionally-manic psych energy and reverb-drenched ballads (via a brief foray into glam pop territory), it most often presents a band who appear to be less eager to leap offstage into a thronging mass of people in an acid-tripped mania, and more a collective who’d prefer to lie down on the grass on a warm summer’s night and ponder why the night sky is orange.

Built mostly around all the wonderful things you can do with a synth, an effects pedal, and high-pitched vocals – following in the footsteps of evident influences Todd Rundgren, MGMT, and The Flaming Lips – Pond’s latest is perfect for those who subscribe to music that hurtles through sonic galaxy after sonic galaxy. Opener ‘Waiting Around for Grace’ takes its lead from some soaring, psychedelic keys, backed by some competent drumwork and guitar breaks. It’s a fine introduction to the kind of sound that the band are capable of producing; a real foot-tapper that should set the standard for the remainder of the record – which is certainly true of following track ‘Elvis’ Flaming Star’, the closest thing on Man, It Feels… to a concise pop single. Capable of inducing the renowned Pond mania in a sweaty sweatbox of a venue near you, it’s a frenetic mumble-jumble of a glam number which ascends as Allbrook laments: “I hope they bring back Elvis, and all the stars of the past…” 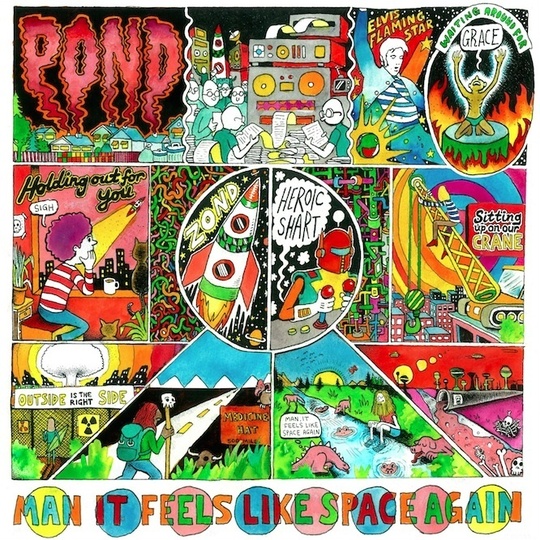 But just as the promise of this high energy looks set to stick around, it trails off somewhat with the introduction of some rather more, ahem, measured tracks. Sure, it showcases Pond’s ability to write a different type of song than what’s expected of them, but it isn’t half as fun as the opening eight-and-a-half minutes. ‘Holding Out For You’ is the first case in point: a balladic, reflective sort of song that seems incapable of ending once you’ve registered that it is indeed a thoughtful ballad. The terribly-named ‘Heroic Shart’ gets a bit muddled in its utter submergence in reverb, whilst the stretched-put ‘Sitting In Our Crane’ is another prolonged number that’ll only appeal to the ordained synth enthusiasts among us.

It’s a record that essentially subscribes to the notion, to borrow a football analogy, of a game of two halves. Half of the nine tracks are explosive, immediate numbers – the opening two tracks, plus the trippy exercise-video audio of ‘Zond’ and the funkadelic ‘Outside The Right Side’ – whilst the other contain slow-burning offerings that end up feeling more like an interlude between the genuinely more exciting prospects found elsewhere.

It’s left, then, to the record’s eight-minute-long closer (and title track) to determine its final reckoning. But as it’s made up of innumerable parts and shifting focuses, it reminds us that when it comes to a band like Pond, there really shouldn’t be any rules that we expect them to follow. Rather than re-invent the wheel, they’ve instead covered it in thousands of sequins, loaded it into a fluorescent cannon, and fired into the deepest, trippiest stratosphere in the whole solar system. And as it hurtles through the infinite abyss of space, there Pond are, playing this album whilst floating along on a magic carpet. My head hurts, I’m going for a lie down.

Next post The Jesus and Mary Chain 30th Anniversary Tour