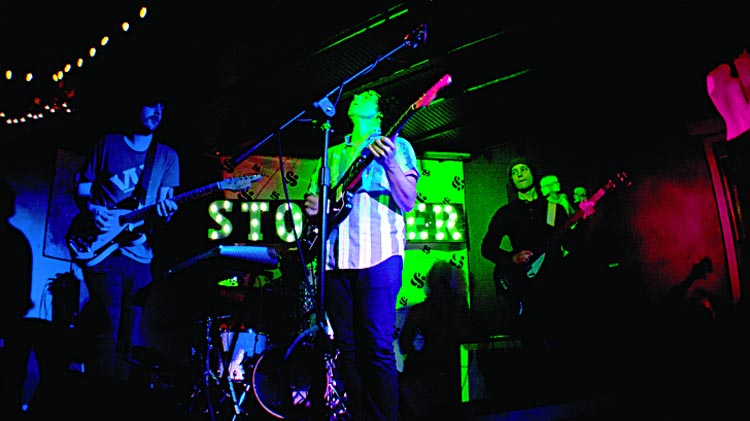 Interview for The Inkwell by Emily Smith, Arts and Entertainment Editor

Emily Smith: How did you all meet and form Penicillin Baby?

Jon Conant (Lead singer): Me and Charlie were kind of the only ones around in the beginning. Over time we improved our lineup to add these guys. We moved to Murfreesboro, which is a college town outside of Nashville. We all went to school or went to shows there. So when I moved to Nashville, I just started writing different songs with bands and Charlie Davis ended up in my house one night. I knew him but not super well and he ended up fitting right in. So that’s when we kind of started making this band. A couple months or a year later, Taylor Lowrance (guitarist) hopped on and about a year and a half ago Wes Mitchell (drummer) joined. He was in a lot of bands and then he finally got free enough to join our party so now he’s with us. Over time we slowly got better and better members so now we’re full force.

EM: You classify your genre as “space trash.” What is that?

Charlie Davis(guitarist): When we started the band, I don’t think we really knew what we wanted to sound like.

Jon Conant: I think when we started out we were pretty psychedelic, we’re still kind of psychedelic I think. But we’re just trying to write better songs. There are a lot more influences now. I try not to classify it as being a psychedelic band because there are so many bands running with that sound right now. When I was making up the space trash term, I was like it’s kind of spacey but with trashy low phi recordings in the beginning. So I put those two words together.

EM: Have your influences changed since you started?

Jon Conant: They’ve been progressing a little bit. When I first started writing, I was really into a lot of psychedelic stuff. 13th Floor Elevators were one of my huge influences at first and also weird punk bands like Modern Lovers and Television were kind of where it started out. But now as I’ve been writing more songs and hopefully getting better at it, I’ve been listening to other types of stuff, more guitar based pop with good structure, trying to learn from that.

EM: How has your sound changed since you started?

Jon Conant: I think we started out being psychedelic because it was easy to make noise at shows and call yourself that. As we’re refining it over time it’s becoming a more constructed type of song rather than just loose space trash. We definitely now write more concise, pop minded songs as opposed to our old songs that were more jammy and loose, instrumental breakdowns and noise. Now our set is down to the minute and that happens every time because the songs are constructed that way.

EM: Who writes the songs?

Jon Conant: When I first started this band, I had only written a handful of songs. Now I’ve written way more songs. So if you do anything over and over again, you’ll finally get better at it. (Private School Kids) was the first straight up pop song I ever wrote. Once I wrote that, I started writing more well structured songs.

EM: Where did the name Penicillin Baby come from?

Jon Conant: David Cross had a sketch show in the 90s called Mr. Show and there’s this one sketch where an entertainer in the 20s sings songs about inventions and he becomes famous. So David Cross and this guy become rivals that go on tour together and they invent something and write a song about it because the inventions weren’t happening fast enough at the time and according to the sketch nobody wanted to hear about things that weren’t invented yet like the time machine. So there’s this one part where he’s singing “Penicillin Baby loves it, penicillin baby loves it..” And for some reason I was singing that for like two weeks when we were trying to make up a name and we all just kept singing it. I think the sketch is called Megaphone Cruders or Monster of Megaphones

Taylor Lowrance (guitarist): We decided that our name was gonna come from that skit, somehow someway.

Jon Conant: We should have named our band “Thank you!” Thank you, we’re “Thank you!” But now we have a name that’s really hard to spell. So you get to use Google to your advantage trying to find us.

EM: What kind of struggles have you encountered as a band?

Charlie Davis: Dealing with me.

Jon Conant: I think the hardest thing about living in a town like Nashville is just finding people who are committed to what you’re doing and stick with it as opposed to somebody who just plays and also plays in seven other bands. I think the biggest struggle is finding the core group of people, these guys, who are willing to be poor, go on the road, not have any money, and just play music because it’s fun.

EM: What kind of experiences have you had with this band that you would have never expected?

Jon Conant: Somehow we end up on a lot of rooftops. If I thought I was going to be in a band, I never thought I’d spend this much time on roof tops and tall buildings. We did it in New York, we did it last night in Athens, we always end up on a roof top. I’ll find the roof tonight. I didn’t expect that to be a part of my music career, my expertise of getting on roofs of buildings.

EM: What current projects are you working on?

Jon Conant: We just had a single come out Monday called “Stick it Out”. That’s from the first song on our record that’s in the works right now and hopefully coming out soon. This will be our first full length record. We’ve done a lot of Eps and singles in the past. I think this collection of songs is really strong. This is the first time that we’ve had a collection of songs that should be a record so they’re in the works right now, they’re recorded, they’re just floating around waiting to come out.

EM: What kind of advice do you have for bands who either want to play at Stopover in the future or want to go on tour?

Jon Conant: Stay busy as much as possible, don’t just play shows in your hometown. Especially in the Southeast there are cities that are only two or three hours away. And you’re not really doing yourself any good if you play at the coolest club in your town twice a month. That’s not really helping you in the bigger picture. So I think if you’re a band who really wants to tour and get on the road and play at festivals like this do it nonstop. Make connections, be everybody’s friend so everywhere you go you have friends. Have fun all the time. Get drunk a lot, have fun, and live the dream.

Previous post Psych of the South: Dead on Arrival's 'Run Hide Get Away' (1969)