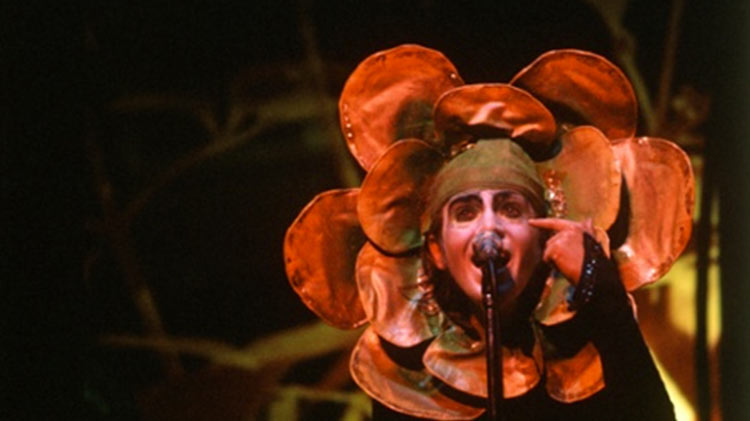 Formed by singer Peter Gabriel and keyboard player Tony Banks while students at Charterhouse public school, Genesis began their recording career inauspiciously with a best-forgotten 1969 debut produced by Jonathan King and possessing a title, From Genesis to Revelation, that saw it filed away with religious music in record shops. The following year’s Trespass, their first for Charisma Records, hewed closer to the progressive rock for which they would soon become famed, and The Knife – a late addition to the album – was its strongest track. The lyric – a pointed repudiation of the kind of myths peddled by military recruitment posters – was, Gabriel later admitted, the work of “a public schoolboy rebelling against his background”, but it remains stirring stuff, anticipating Metallica’s own anti-war anthem Disposable Heroes, which came 15 years later. The Knife’s shifting tempos, marching organ and serrated guitar is best represented on the group’s 1973 Live album, with new additions Phil Collins (drums) and Steve Hackett (guitar) lending the track a fitting proto-thrash ferocity.

By their third album Nursery Cryme, Genesis’s classic lineup was in place, and the eccentric, macabre, blackly comic lyricism that would characterise Peter Gabriel’s era with the group came to the fore. The album’s gatefold sleeve – an exercise in twisted Victoriana painted by Paul Whitehead – depicted little girls playing croquet with severed heads, and drew inspiration from the album’s opener title track. Gabriel sketched out the song’s twisted narrative in a short vignette on the inner sleeve, telling of a young boy who had been beheaded by his friend Cynthia during a croquet match, returning as a spirit haunting her musical box, manifesting before her as a rapidly ageing spirit with “a lifetime’s desires surg[ing] through him”. Creepy stuff, but the music thrills most: its three movements shift from baroque, Eastern-tinged folk, through a middle section featuring Tony Banks’s fuzz-toned keyboards and Steve Hackett’s finger-tapped arpeggios, to an eerie, yearning final passage that gave Gabriel space to explore the rich, soulful voice he would later capitalise on in his solo career. That he was employing that voice to bring to life an aged ghost howling “Why won’t you touch me?” to a nine-year-old girl – and, when performing the song onstage, wearing a creepy “old man” mask – only serves to frame just how peculiar Genesis could be.

3: Watcher of the Skies

1972’s Foxtrot was dominated by Supper’s Ready, a 23-minute suite that took up almost the entirety of the album’s second side, linking together seven separate song fragments with segues and recurring motifs, a bravura gesture that still impresses today. But it seems like cheating to nominate such a suite for this 10 of the Best. Certainly, Supper’s Ready’s whole is stronger than any of its constituent parts, and no one fragment is as stirring as this, the album’s opening piece. Inspired by Keats’s On First Looking Into Chapman’s Homer and Arthur C Clarke’s Childhood’s End, Watcher of the Skies opens with a minute and a half of swirling mellotron, before Collins and bassist Mike Rutherford kick up the stuttering, staccato riff that gives the song its zestful clip – a lithe-but-unfunky groove that, in the closing minutes, turns into a fierce blitz as Banks’s keys stir ever-more-sinister dramas. The lyric, meanwhile, calmly imagines “the end of man’s long union with the Earth”, Gabriel playing some impassive extra-terrestrial observing such an apocalypse – a character akin, perhaps, to Marvel Comics’ Uatu The Watcher, and a role that the ever-theatrical singer would portray in concert by wearing day-glo make-up and a large, jagged cowl.

Tony Banks considered the lyrics he and Mike Rutherford penned for Firth of Fifth – highlight of the band’s finest album, 1973’s Selling England by the Pound – to be among the worst of his career, and lines such as “The mountain cuts off the town from view / Like a cancer growth is removed by skill” suggest that he is not being falsely modest. But the considerable joys of Firth of Fifth lie not in its words, but in Banks’s blossoming piano prelude, the ascending prog-rock hymnal of its main section, and the way the band revisit Banks’ opening piece as an ensemble for its closing five minutes. Indeed, this rapturous final section – Hackett’s swooning guitar, Collins’ muscular and inventive percussion, Banks’s futuristic synths – is a testament to Genesis as that rarity among proggers, a band that never allowed their technical proficiency to overspill into senseless excess, nor overwhelm their sense of the song. And the music they play in those five minutes is far more effective as an uplifting ode to the beauty of nature than those clunky lyrics.

Then, in among their 10-minute epics and 22-minute song cycles, Genesis dropped their first unexpected pop gem. Clocking in at a shade over four minutes, I Know What I Like rises with a heat-haze shimmer, before locking into a groove akin to Traffic’s Hole in my Shoe, a hippy reverie that fits the song’s slacker vibe like a pair of tailored bell-bottoms. The song’s anti-hero is a misfit, like all the others in the Gabriel-era songbook, a drop-out happy with his lawnmowing life, despite the disapproving whispers of his suburban neighbours. His rebellion is soundtracked by a nagging, lazy sitar lick, a woozy singalong chorus, and a flute solo that Pan’s People doubtless interpreted through the medium of dance when the song appeared on Top Of The Pops after reaching No 21 in the charts (footage of which has sadly yet to reach Youtube).

By 1974, tensions were simmering within Genesis. Increasingly perceived by the press as leader of the supposedly democratic group, Gabriel’s penchant for outlandish stage costumes – donning a fox’s head, dressing like a flower or sporting a vicar’s garb as the song demanded – was accused by Banks et al of overshadowing the music. He briefly quit the group after accepting an offer from Exorcist director William Friedkin to work on a movie script, but rejoined before work began on Genesis’s sixth album The Lamb Lies Down on Broadway. This LP is a concept piece, inspired by Jodorowsky’s El Topo, that follows a New York street kid’s journey into a dark, mystical underground realm to rescue his brother from horrific beasts. In a break from Genesis tradition, Gabriel penned all the lyrics for Lamb on his own, as he commuted between the recording studio at Headley Grange and London, where his wife and first child were recovering in hospital following a traumatic birth. As his bandmates pressurised him to spend more time on the group, and less on his family, it is tempting to read Lamb – which Collins believed was an album about split personalities – as a metaphor for Gabriel’s torn allegiances. Certainly the album’s highlight, In the Cage, seems autobiographical, Gabriel singing “I’ve got sunshine in my stomach/ Like I just rocked my baby to sleep”, before the dulcet opening gives way to an ever tighter and more frenetic prog workout, the riff tightening, claustrophobic, as Gabriel sings of being trapped and tortured, “Holding still/ pinned for kill … in this cushioned straitjacket”. Lamb was Genesis’s boldest album yet, and the resulting tour their most ambitious, an audio-visual extravaganza that saw Gabriel dressed as grotesque pustule-covered monsters and seemingly materialising on both sides of the stage at once. But it would also be his last. In 1975, he quit Genesis to pursue a solo career, throwing the band into disarray. The Lamb Lies Down on Broadway is puzzlingly absent from Spotify; please accept this live version instead.

Gabriel’s exit would ultimately deliver Genesis the greatest commercial successes of their career, as drummer Phil Collins took the microphone and led the group away from prog and toward a more streamlined modern rock, achieving previously unimaginable hit singles along the way. Collins’ first three albums as singer captured a band in transition, but by 1980’s Duke they had shed the chrysalis and located the sound they would so lucratively pursue for the rest of the decade. This development was heard clearest on Turn It on Again: while the song skipped between four separate time signatures in its four minutes, Rutherford’s central guitar riff was simple and effective, while Collins’s vocals ditched the pointed Englishness of yore for a mid-Atlantic drawl that would play well on American radio. The prognoscenti cried foul, but the future belonged to this incarnation of Genesis, and Turn It on Again’s pileup of addictive hooks scored them their first top-10 single.

But Genesis hadn’t entirely turned their back on their prog roots. Turn It on Again was, in fact, part of a suite of thematically linked songs within Duke composing a mini-suite in the vein of Supper’s Ready, although the group didn’t publicly acknowledge this at the time. The finest element of this – one of the finest tracks in the entire Genesis discography – Duchess told the story of a diva’s rise and fall, with Collins’ soulful vocal powered by Banks’s driving piano chords and some truly colossal drums. For all its anthemic qualities, however, Duchess’s most bewitching moments came with its intro and outro: ambient, elemental passages of programmed electronic drums that suggest the band were paying attention to the experimental work of Brian Eno. This was probably no coincidence, given that Collins had been a regular collaborator of Eno’s since playing drums on Taking Tiger Mountain (By Strategy), as payback for Eno’s contributions to The Lamb Lies Down on Broadway. Along with Banks’s restrained synths, the drum machine pulses conjure a hypnotic and evocative soundscape that was airy and futuristic. Collins would further explore the dramatic potential of drum machines, both with Genesis and, of course, on his first solo single, In the Air Tonight.

“Less is more” seemed the ethos for Genesis’s next album Abacab. “Punk had left some mark,” admitted Collins and this can be hard in the self-conscious stomp of Who Dunnit?. Meanwhile, the album also features an upbeat pop collaboration with Earth Wind & Fire’s horn section on No Reply At All. The powerful title track summed up what Tony Banks described as the album’s overall “unromantic” feel: a sparse and cold jam with an airy, spacy quality more like Eno or Krautrock than anything in the Genesis catalogue. Tracks were lent extra heft by engineer Hugh Padgham, who developed the signature “gated” effect for Collins’ drum tracks that would dominate 80s rock.

By 1986, Collins had become one of the world’s biggest stars, as the soul-rock confections of his solo albums led him to multi-platinum success and a budding movie career. Much of that year’s Genesis album Invisible Touch – its bright, polished pop title track, the baby boomer agit-rock of Land of Confusion, the genuinely affecting ballad Throwing It All Away – could have easily fitted on his solo albums. Domino, however, was different. This track is a fusion of everything Genesis had ever been and now become: an 11-minute multi-part epic played with the minimal attack of Abacab, the haunting In the Glow of the Night giving way to the anthemic synth-rock bombast of The Last Domino. Invisible Touch went on to become Genesis’s most successful album and the resulting tour climaxed with four sold-out nights at Wembley Stadium. These were filmed for a subsequent concert video that was awash with evidence – from Rutherford’s headless guitar, to Collins’ grimace-inducing Blues Brothers-style mugging during a closing medley of soul classics – of the era’s worst excesses. Domino, however, proved a final gasp of brilliance before the blandness of 1991’s We Can’t Dance and 1997’s inexplicable, Collins-less Calling All Stations.