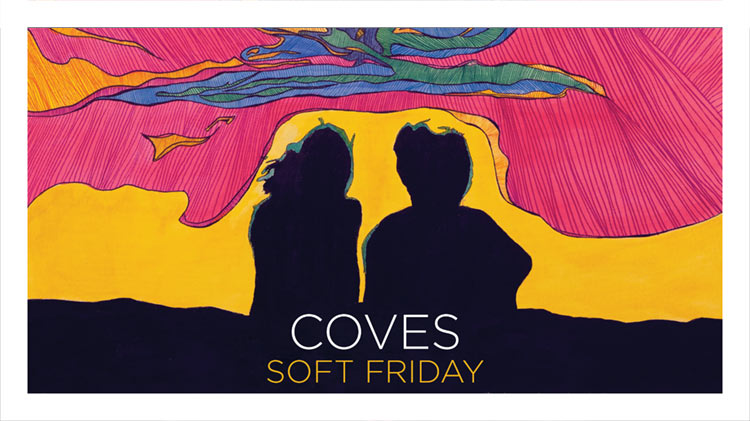 Coves are the U.K.-based project of singer/songwriter Beck Wood and producer John Ridgard. They recorded their debut album Soft Friday in a basement studio called Castle Grayskull, and the kitschy nostalgia must have been oozing off the walls. It definitely made it onto the record, which takes the thick sounds of My Bloody Valentine and plasters them all over Soft Friday’s charming pop songs.

Soft Friday kicks off with a pounding drumroll. “Fall Out of Love,” the opening track, packs in the sugary pop with a distinctly vintage edge. The riff sounds lifted straight from a ’60s spy film, but also meets up with some twangy Pixies-esque notes. On “Honeybee,” things start sounding very Jesus and Mary Chain, as the song is absolutely flooded with fuse-blown distortion, reverbed guitars, and dramatic snare crashes. Tracks like “Cast a Shadow” and “Let the Sun Go” perfectly fuse the sunshine of ’60s psychedelia with the gritty darkness of ’90s alt-rock. The album’s closer, “Wake Up,” might be the best track on the album, with its relentless groove dragging along in direct contrast with Wood’s ethereal voice.

Speaking of the vocals, the lyrics on this album are borderline obsessive, but despite Wood’s flawless delivery the singing just isn’t what stands out here. Rather, it serves as a peculiar complement to the sound as a whole, which is a perfectly envisioned palette of alt rock tricks. The biggest misstep here is that none of the songs are particularly memorable. Coves have put together a good record that takes the listener for a joyride through a psych pop paradise, but once the ride is over it just doesn’t quite stick. (www.covesband.co.uk)