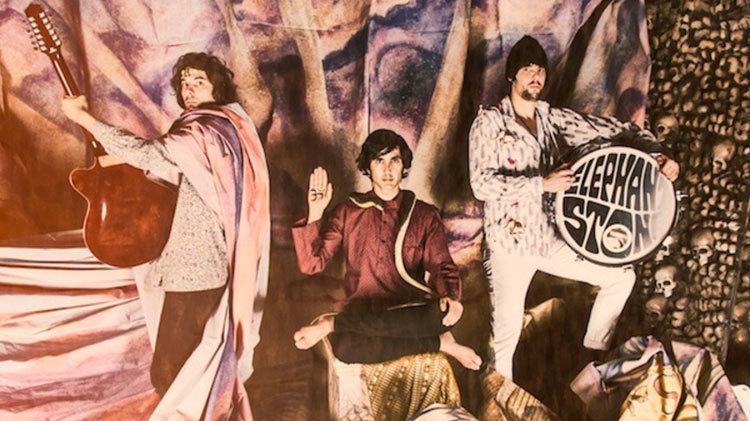 Montreal psych rockers Elephant Stone will release their third studio album, The Three Poisons, on August 26th via Hidden Pony Records. In anticipation, the album is streaming in full below.

Dhir added that the trio achieved something nearing their creative pinnacle during the album’s endless recording sessions: “The grooves were groovier, the sonics rumbled heavier, and the songs were connecting to something bigger. I heard the groove of the Mondays, the darkness of Echo, the jangle of Ride … but what I truly heard and felt coming together in these new batch of songs was — and is — unequivocally the sound of Elephant Stone.”

In an interview with CoS, Dhir compared the album’s arrival to that of a newborn baby:

What can you say about your newest born except that he’s perfect? We spent the past 9 months nurturing him; making sure everything would be ready for his arrival. We took every precaution: the perfect name, the best clothes, the best home … But when he eventually arrives, you realize that no matter how hard you can try to make his world perfect, the world isn’t perfect: it’s cruel, hateful, judgmental, sad, heartbreaking … but he’s still beautiful and perfect. You believe in this with all your heart, no matter what anyone thinks. The Three Poisons is our newest baby, and we love him unconditionally.

The album is preceded by three singles: the title track, “Knock You From Yr Mountain”, and “Child of Nature (Om Namah Shivaya)”.

Pre-orders for the album are ongoing.

Next post The War on Drugs “Under the Pressure” Music Video)