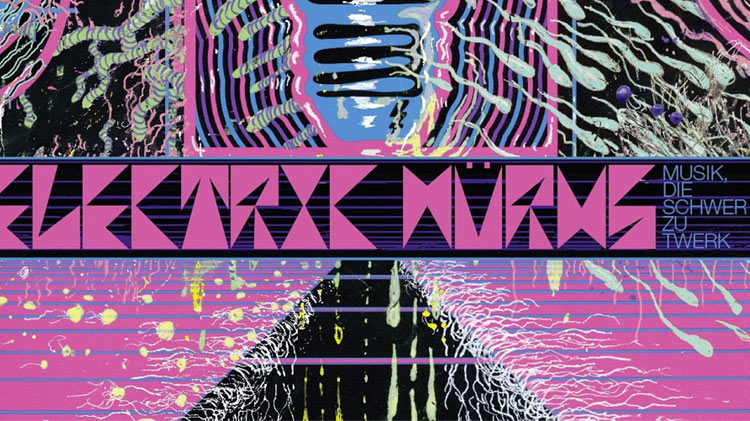 With the release of Embryonic in 2009, the Flaming Lips ushered in yet another era in their continually evolving brand of psychedelic insanity, diving into the realms of prog, Krautrock, and Miles Davis-inspired musical freakouts with reckless abandon. Along with producing some of the band’s most exciting work in years, the album also kicked off an unprecedented prolific streak, with new musical experiments arriving at an amazing clip. Where other musicians might be content with putting out over a dozen releases in five years, Lips’ members Wayne Coyne and Steven Drozd continue their relentless pursuit of crunchy, prog-perfection with their new side project, Electric Würms, making their exploratory and mind-expanding debut with Musik, Die Schwer Zu Twerk. The project finds Drozd stepping into the role of frontman, with Coyne joining a supporting cast that includes the entirety of Nashville psych-rock quartet Linear Downfall.

At the controls of Electric Würms’ sonic spaceship, Drozd leads the band on a musical exploration that feels refreshingly unfettered, following ideas wherever they may lead, giving the album a looser, more improvisatory vibe. Given Musik, Die Schwer Zu Twerk’s far-out leanings, the biggest surprise is that the album clocks in at just under 30 minutes. Although this might seem short for an album looking to revive the ways of prog legends like Yes (who are covered here with a condensed version of “Heart of the Sunrise”), it shows the kind of focus that Drozd brings to his composition, with only the most essential moments of any jam making their way to album. Electric Würms are a band with the creative enthusiasm of bold young upstarts and the kind of practiced restraint that comes with decades of experience, a mix that helps the band separate itself, even if just a little bit, from the Flaming Lips.

This allows Musik, Die Schwer Zu Twerk to be an album that caters to the sensibilities of the Lips’-voracious fan base without doing so exclusively, providing an entryway for old-school prog lovers to check out how weird the guys from that little band that did that jelly song have gotten over the last couple of decades.

Next post Nik Turner’s Hawkwind Performs at The Viper Room