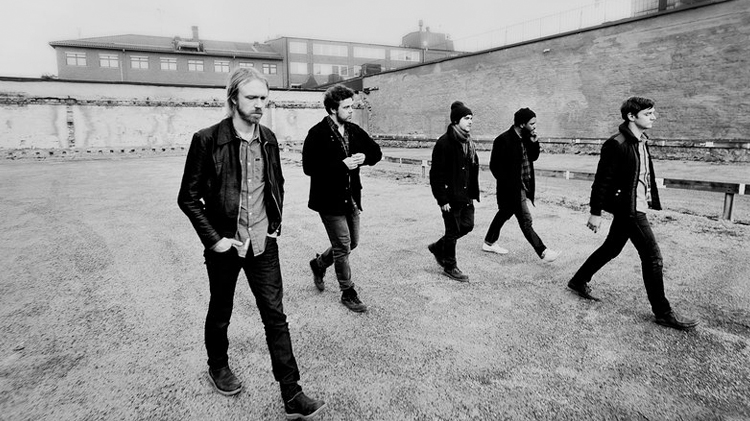 It’s easy to use hyperbolic adjectives when describing songs like “Safe Island.” The Amazing crafts a sound that’s huge, sprawling, immense and so on, but words aren’t worth much when you’re confronted with a song this enveloping. Picture You, the Swedish band’s third album, touches on the psych-rock guitarist Reine Fiske previously made with Dungen, but The Amazing ventures further, dipping its toes into shoegaze and psychedelia without drowning in era-specific signifiers.

In “Safe Island,” Christoffer Gunrup’s voice is so bathed in effects that it’s nearly impossible to decipher what he’s singing about. Instead, you’re left with a shapeless quality that’s both beautiful and immensely sad, all before the song dissolves into a feedback-driven coda.

A contemporary psych-rock renaissance is currently underway, producing exciting new guitar music. Among the groups contributing to the new canon of experimental, psychedelic grandeur is Sweden’s the Amazing, a three-guitar beast that lives in clouds of tape delay and wispy acoustic guitars. The group spins richly layered albums that engage the deep listener while remaining approachable and digestible. Infused with both a prog-rock twist and a hearty folk infusion, the band’s latest, Picture You, is a delicate tapestry of classic sounds and imaginative songwriting. 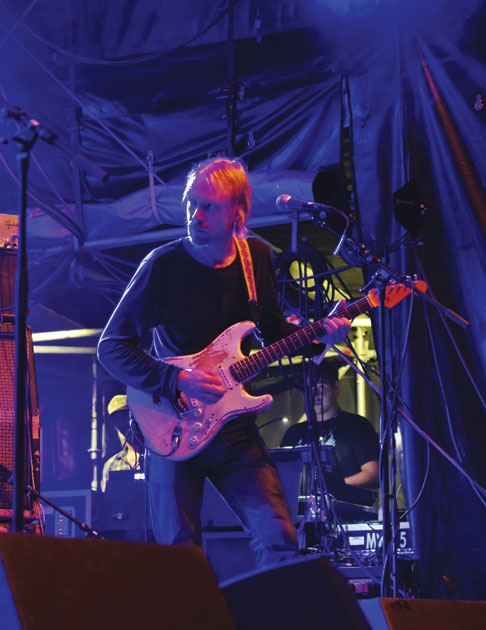 Reine Fiske plays his main guitar—a Strat assembled from various vintage parts—at a gig with Motorpsycho at the 2013 Krach am Bach festival in Beelen, Germany. Photo by Rainer Knpper.

Reine Fiske, perhaps best known for his work with psych-rock cult heroes Dungen, is the Amazing’s lead guitarist and self-professed chaser of sounds. Fiske is an anomaly, in that he eschews the guitar heroes usually associated with his chosen genres in favor of world musicians and relatively obscure Nordic artists. We spoke with him about creating Picture You, his affinity for the classic Klemt Echolette tape delay, and the influences that set him apart from his peers.

Picture You has an incredibly warm, almost ’70s-like quality. How did you achieve that?
The studio where it was recorded is not a state-of-the-art place. It’s totally analog, with an old mixing desk and old microphones. I guess everyone in the band sort of prefers vintage stuff. If it can be classic yet still different from everyone else, that’s where we want to be.

Did you play a role in the production?
I’ve never really worked in that field, but I’m fascinated by how things sound, and with getting those sounds when we make a recording. We like to seek very specific sounds. I know what certain mics do and how to place them to get those different sounds, but I’m not exactly a producer. We wanted a big, open sound, so everything was recorded live in a pretty big room. My guitar amp was in a room with the door half open, and everyone was standing in a circle so we could watch one another as we played.

“There’s something that’s created in the sound with the old tape echoes that I can’t really emulate with anything else.”

There’s a lot of exploratory playing and open space in the songs. Was that improvised or planned?
Not to say that this recording wasn’t free, but it was much more structured and arranged than our previous records. We actually rehearsed the songs a couple of times before we recorded them. Before, Christoffer [Gunrup, the group’s vocalist] would just call and say “Hey! We’re going to record this week!” and everyone turned up. We drank a lot, and we maybe went through the songs once or twice and did some overdubbing. It was a bit hazier, and we created a certain atmosphere because it was so loose. This time we went in with more of an album-minded way of thinking.

What guitar equipment did you use this time?
The only amp I used was a vintage Fender Super Reverb. I think it was a ’73, but it wasn’t mine—it belongs to Fredrik [Swahn], our other guitarist. It’s an amazing amp! It’s really loud, and there’s just something incredible about the type of gain it gets. Together with the tape echo it really creates an amazing sound.

I’ve seen you use a Klemt Echolette in photos. Is that still your echo, and do you use it live?
Yeah, usually. But we haven’t played live that much yet, so I haven’t used it much in that context. I always use the same two settings: a slapback thing, and a more triggered, triple-echo sound. It also makes for an amazing preamp. You can use any shitty amp with it, and it usually still sounds good. The echo certainly changes the quality of the tone, but if you can use a vintage Fender or an old Marshall, it’s a supreme combination.

Is there a reason you still use an authentic tape echo unit when there are so many great modeling pedals?
I think some of them are okay. I’ve used Catalinbread’s Binson Echorec-based pedal lately—not for guitar, but for the Mellotron—and it’s actually really good. I understand that it’s really hard to produce that particular sound in pedals—you need actual tubes and transistors and everything to really make that sound, in my opinion. I mean, today’s technology is just crazy, but I still think you can hear the difference in pedal form. They just don’t always behave in the way I want them to behave. Usually it’s a problem with the gain structure: There’s either too much gain and the sound becomes too compressed, or it’s the other way around, and there isn’t enough gain. Sometimes I record overdubs with an extra delay pedal or something, but there’s something that’s created in the sound with the old tape echoes that I can’t really emulate with anything else.

Do you use any other effects?
I use a pedalboard, but I can never really decide on the pedals I want to put on it. The pedals I use most are a Strymon Flint, a Creepy Fingers fuzz, a ZVEX Fuzz Factory, a vintage Fuzz Face, and some others. I have a lot more from people who build me stuff that don’t always make it on the board. I have a lot of fuzz pedals, boost pedals, and preamp-type things. Normally, I always use my old Fuzz Face and just a Cry Baby wah. A new find is this Carlin compressor pedal, which is one of the most radical pedals I’ve ever stumbled upon. There’s actually a clone made now by a guy named Moodysound, and it’s really good. 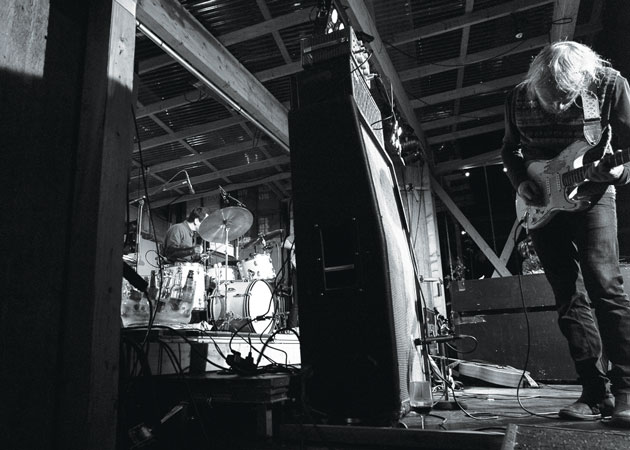 Fiske uses the Klemt Echolettetape echo for two sounds: a slapback delay and a triggered, triple-echo sound. “It actually also makes for an amazing preamp,” he adds. “You can use any shitty amp with it, and it usually still sounds good.”
Photo by Ken Andersson.

I’ve only ever seen you photographed playing that beat-up white Stratocaster.
Yeah, it’s the only guitar I use, really. It’s a vintage one that’s been refinished. I got it in 1993. I think the body is from August of ’63, the neck is from September of ’64, and the pickups are rewound vintage models. I set it up with .011s. That can make some kinds of music pretty hard to play, but I’ve gotten used to playing on them, and I prefer the way they sound.

The guitar freak-out at the end of “Fryshusfunk” is phenomenal. What are we hearing there?
That was actually recorded out of the studio as an overdub in Fredrik’s rehearsal room. I was listening to early Funkadelic records, especially the first one, and that’s the sound I wanted to find—that sort of straight-into-the-mixing-board sound. But it came out a little too distorted, and it’s not really the sound I was looking for.

Which players inform your identity as a guitarist?
First of all, I believe you shouldn’t be listening to just guitar players—I’m more of a big-picture listener. That said, it sort depends on my mood. I find inspiration in many, many places. For instance, when John McLaughlin played with the Tony Williams Lifetime, that was just sick and had a big influence on me. It was almost punk rock in its attitude. He plays bum notes, and the guitar can sound really horrible at times. It’s dirty, and it sounds like he’s using a wah wah pedal with a broken battery, or maybe like the cord was broken. They were probably just out of their minds in those days and didn’t care, but the attitude there was a big influence on me.

But honestly, the people I listen to the most are Scandinavian players who are somewhat obscure internationally. There’s something in their tonal and melodic language that has been very influential to my playing, though they are generally a bit more folky than I am. I actually see myself as a folk player in terms of my melodic sense, though I’m obviously not one in strict terms. Lately I’ve been listening to a lot of early ’70s African music, so I’m really all over the place these days. When I was a teenager, one day I was going through Mark Knopfler one day, Yngwie Malmsteen the next, and the next day was David Gilmour. I’ve always been everywhere, but I never learned to play with that kind of control. I’ve always been more focused on melody.

Do you ever find it difficult to sort out sonic space with three guitarists?
Sometimes it can get a bit too thick in the middle, so to speak. There are lots of guitars everywhere in our music, but most of the parts for this album were actually pretty well arranged, especially compared to our first album. We usually manage to get a pretty good live sound, and since everything on the album was recorded live without many overdubs, it translates well. The important thing for us is to think about dynamics live in how we approach a song. 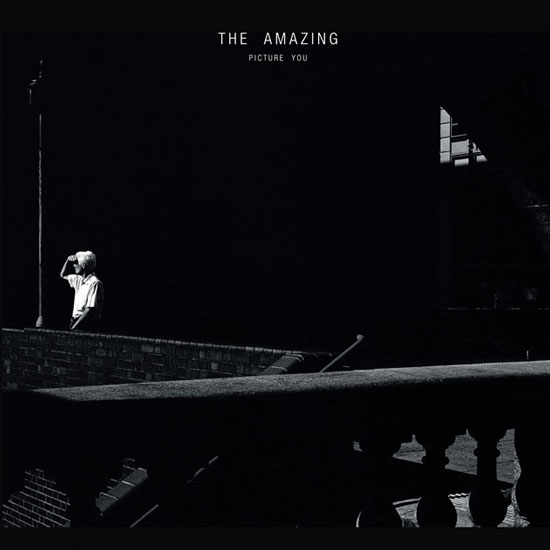 The Amazing’s Picture You was recorded in three days on analog gear that suited the band’s vintage preferences. “If it can be classic yet still different from everyone else, that’s where we want to be,” says lead guitarist Reine Fiske.

Reine Fiske cites many influences in his eclectic quest for sounds, and he wants to pay it forward. “I feel it’s important to pass on the torch,” he says, “especially in terms of the inspiration taken from others and blended through me, and hopefully passed on to interested others that listen to my playing.” Fiske gives us his shortlist of notable Scandinavian guitarists to check out.

· Thomas Arnesen and Leif Östman, who appear on the band Panta Rei’s self-titled album, released on Harvest Records in Sweden in 1973.

“The people I listen to the most are Scandinavian players who are somewhat obscure internationally. There’s something in their tonal and melodic language that has been very influential to my playing.”

· Matti Kurkinen of the Finnish psych-prog band Kalevala. (“The debut album People No Nameswas very big for me,” says Fiske.)

· Nils Henriksen of Culpeper’s Orchard from Denmark. (Their first self-titled album was released on Polydor 1971 and Second Sight appeared a year later.)

· Flemming “Giese” Rasmussen from the Danish band Alrune Rod. (“Their first two albums are amazing. They released a doomy and passionate self-titled debut in 1969, as well as an ultra-stoned downer classic Hej Du in 1970.”)

Picture You is out 2/17 in the US via Partisan. Order it in digital and physical formats.

Next post The Black Angels on U2, Bad Haircuts, Childhood Celebrity Crushes, Selling Out, and Changing Back to the Future