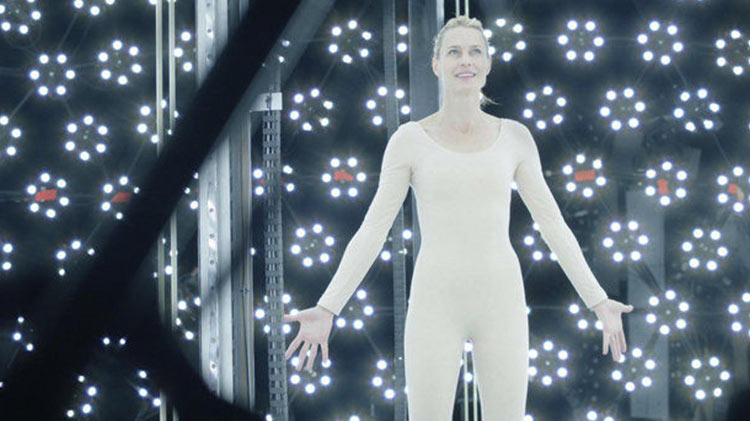 The sci-fi parable “The Congress” is an odd, two-headed thing. On the one hand, director Ari Folman’s down-the-rabbit-hole mind trip is a film of admirable ambition and thrilling cinematic derring-do. On the other, and not at all unlike its D.C. namesake, it also has a tendency to get lost in the weeds — to overtalk and overanalyze with a sense of rudderlessness, happily accomplishing things at its own filibustering pace and damn the torpedoes.

This “Congress” boasts big ideas that it wants audiences to mull over. We’re talking about such heavy concepts as the cannibalistic nature of celebrity culture, about the soul-sapping tendencies of Hollywood, about Americans’ fondness for chemical-induced reality. But identifying its ideas and divining exactly what it wants to say about them are two dramatically different things.

That’s because Folman’s sprawling, labyrinthine film doesn’t so much discuss them in any cohesive, coherent way as it merely points them out. In those cases in which it does try to delve deeper, things get trippy in a hurry.

Still, there’s an intriguing intelligence simmering away in Folman’s film, which is undergirded with a sense of cinematic adventurousness that employs both animation as well as live-action photography.

Still, the character’s Hollywood is similar enough to real Robin’s Hollywood so as to be entirely recognizable, at least at the film’s outset. In both versions of Tinseltown, for example, things aren’t so easy — and work not so plentiful — for aging actresses.

So, with trouble at work and with a special-needs son at home, Wright reluctantly agrees to sign her very last Hollywood contract. It’s not for an acting gig, though. Rather, her body and her personality will be digitized and uploaded to a studio database. Once there, filmmakers can cast her avatar in whatever roles they like, and without any pesky backtalk from the actress herself.

The catch: The real Robin Wright never will be allowed to act again. She’s reluctant, but with a fat paycheck in the balance, she signs.

It’s an interesting start to the story. But then, 50 minutes or so in, we flash-forward 20 years. Here’s where things get animated — and decidedly freaky.

That means all attending must first huff a substance that turns them into an animated version of themselves, so they’ll fit right in with the zone’s surrealist animated landscape. That’s all Folman needs to take his audience on a mind-bending journey — sometimes dreamlike, sometimes nightmarish — though a psychedelic acid trip of a realm that lasts for much of the rest of the film.

It’s not the first time we’ve seen this concept. It was done previously, and with much more polish, in 1988’s “Who Framed Roger Rabbit,” for starters. But Folman and company have their fun with it, thanks to an impish sense of humor and a raft of fleeting, unauthorized cameos from familiar faces.

Folman is no stranger to unconventional use of animation. In 2008’s “Waltz With Bashir,” the Israeli filmmaker used pen and ink to recount his experiences as a soldier in Israel’s 1982 Lebanon War — a sobering and critically acclaimed accounting that would go on earn an Oscar nomination and a Golden Globe for best foreign language film.

The hybrid “Congress” is just as outside-the-box, but it’s not nearly as effective as a piece of storytelling. As a stoner’s delight? Maybe. I can see “The Congress” working its way into midnight-movie rotations here and there. But all that trippy meandering costs “The Congress” when it comes to the emotional investment of its audience.

Sure, we’re all rooting for the somber Robin to come out of her experiences more or less whole. But it’s easy to lose sight of that when you’re constantly trying to wrap your head around the confusing, psychedelic ramblings that eventually overwhelm Folman’s film. Frankly, I’m still scratching my head over much of what I saw.

And that’s both the blessing and the curse of a two-headed beast such as “The Congress.” On the one hand, there’s a thrill in such experimentalism. On the other, it doesn’t always deliver a fully satisfying moviegoing experience.

THE CONGRESS
2 stars, out of 5

Snapshot: A mind-bending sci-fi parable — part animated, part live-action — about an aging actress struggling with a new technology in which entertainers’ images and personalities no longer belong to them.

What works: Robin Wright is solid in the lead role, and the film has some big ideas it wants its audiences to consider.

What doesn’t: After a strong start, it devolves into a sprawling trippiness, as the intent of Folman’s film becomes lost amid its psychedelic ramblings.