So, Wayne Coyne of the Flaming Lips, when you’re inside that big plastic ball and walking on top of your fans, does one festival crowd look pretty much like the next one?

“I would say in a good way, yes,” says Coyne sitting in his car somewhere in his hometown, Oklahoma City.

“They are all happy. They are all surprised. There’s usually one guy who is drinking a beer and obviously sees me coming and I can see it going on in his head ‘I’m not going to do this’ … and then I kind of smash right into his face because he doesn’t hold me up. And on the way back, though, he puts his hands up.”

So there’s a message for those who see the Flaming Lips at the The McLaren Valley Music and Arts Festival in January: Don’t be that guy.

“Yeah. Definitely put your hands up. It will work.” 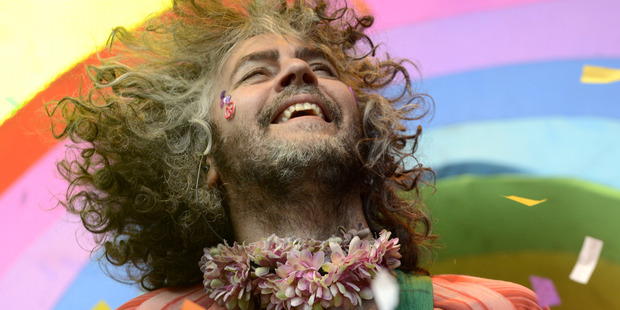 Coyne’s band, which has now existed for 15 or so albums and 30-plus years remains an international festival drawcard.

Mainly because they have a knack of turning any event into their own psychedelic visual and sonic wonderland with lavish use of confetti, fake blood, balloons and animal costumes. They did that when they played the Big Day Out in Auckland in 2004 while Metallica raged on in the main arena.

Arguably it’s the band’s live reputation that’s made them a drawcard, over their modest album sales. They’ve adapted to the hasty haphazard demands of playing multi-act events.

“Little by little we were able to play more festivals and as time went by we would be further up into the night at some of the bigger ones and it wasn’t that long ago where we would be the spectacle at the end of the night.

“I know for sure when you are inviting the Flaming Lips, you are getting the giant spectacle that goes up quickly and comes down quickly.

“At the large festivals for us there is a big part of the audience who don’t know or care about your music. They want to be on some drugs and stand there and have fun anyway.”

Yes drugs have played an often damaging part in The Flaming Lips’ long career. A 2002 compilation of their early albums was titled Finally the Punk Rockers Are Taking Acid – and Coyne has been open about his own occasional consumption: “I sort of love all of it [drugs] as long as you don’t have to lose too much control,” he told The Independent earlier this year.

But right now Coyne is chatty, gossipy, and gregarious. The only thing he refuses to tell us is when the new Miley Cyrus-Flaming Lips album will be out. Soon, it sounds like.

Yes, the Coyne-Cyrus friendship – and their musical collaborations – is fairly perplexing. It came after the pop star tweeted her affection for Coyne and his music. Next thing, there he was duetting on Lucy in the Sky with Diamonds at one of her shows. 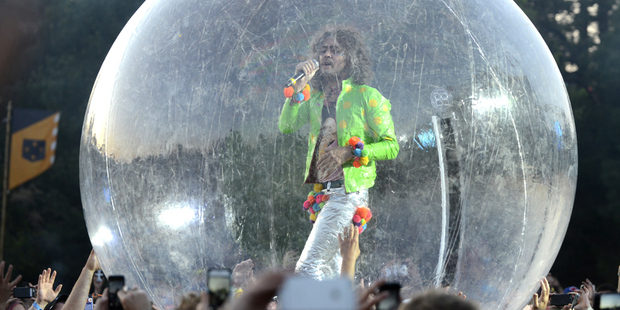 Cyrus sang the song on With a Little Help from My Fwends, the band’s 2014 cover of The Beatles’ Sergeant Pepper’s Lonely Hearts Club Band (they’ve also covered a guest-heavy version of Dark Side of the Moon by Pink Floyd and King Crimson’s prog rock debut In the Court of the Crimson King in recent years too).

And now there’s a Miley-Lips album of originals which might seem like the musical product of a strange media-art experiment – one that has perplexed the respective fans of the 22-year-old household name pop star and the obscure but admired 54-year-old Coyne alike.

“There’s an element of her that is very much do-it-yourself. I don’t think we’d call it punk rock because for her it’s just her way. But we come from a do-it-yourself punk rock and yeah it’s bizarre. But it’s not that bizarre when we are together doing stuff. We are all into a same thing.”

Coyne recalls the Lips had a similar moment of pop culture crossover back in the early 90s when they played early hit She Don’t Use Jelly on the era’s hot teen show.

“When we played the Peach Pit on Beverly Hills 90210, it became a really great defining time for us. A month or two previous to that we probably would have turned them down thinking ‘we’re too cool to do that’. But something in us went that is just going to be outrageous’. It was just ‘this is going to be a f***ing blast to be on this ridiculous TV show” and that really changed everything for us.” 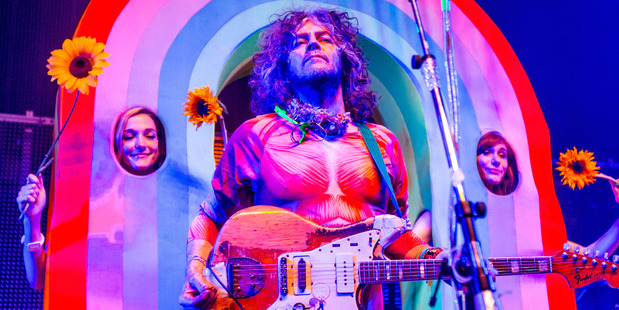 The band have been on the Warner Bros label since those days which makes them, says Coyne, the major label’s longest single contract. “We were always nice to them and they absolutely loved us even though I don’t think they made very much money. I think they loved having us.”

They’ve been left to their own devices by the company since the late 90s when they managed another commercial peak with the 1999 album The Soft Bulletin and 2002’s Yoshimi Battles the Pink Robots which made many best-of-year lists with songs like the affecting anthem Do You Realize??.

Subsequent albums have been less accessible, until the covers records. “We wanted to keep moving on and become something different. By the time we had done Yoshimi Battles the Pink Robots we were already into our fifth phase of what we thought we could be and were pretty comfortable being the absolute weirdos.”

The band celebrated their 30 years of existence two years ago. It didn’t affect Coyne as much as earlier milestones.

“We didn’t notice we”d been around five years. That came and went. Ten years – that kind of felt sightly sad. Like ‘Jesus have we got nothing better to do with our lives?’

“And then as it got into 15, it was ‘jeez are we going to be one of those old bands which are around forever?’

“And then it felt like kind of an achievement. ‘F*** here we are. Are we the last one standing?’

“But getting into this area where it’s 30 years plus there are less groups that are still around. The long ago past – the 80s and the early 90s – some of it becomes a mystery to us. What actually did happen? But lasting this long? I think it’s great.”

Who: Wayne Coyne of The Flaming Lips
What: The McLaren Valley Music and Arts Festival
When: January 10-12

Not Your Usual Xmas Playlist: 15 Freaky Songs to Celebrate