That is to say, the trio traces its roots to the late, iconoclastic rock band by the same name. Equal parts Vangelis and Deep Purple, The Apes were part of a small group of D.C. locals who, about 15 years ago, found inspiration in the not-too-distant future (see also: Trans Am).

But The Apes couldn’t hold onto a singer. So members Amanda Kleinman, Jeff Schmid and Erick Jackson went through three vocalists before they finally decided to invent their own.

The trio started using vocal samples, processing them to Max Headroom heights of electronic dissonance. The three musicians called the singerless lineup Heavy Breathing, and debuted in 2012 with Body Problems. 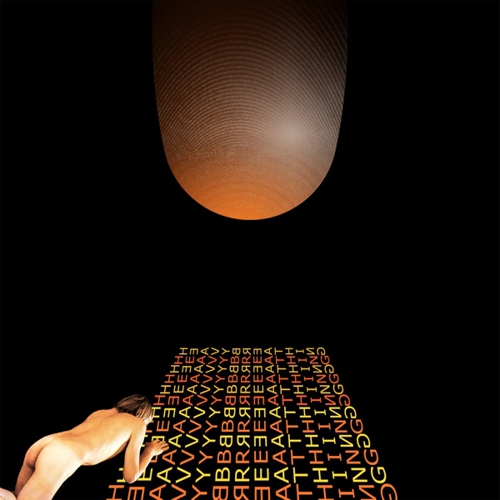 “I take anything that sounds decent and cut up the vocals into single words and syllables,” Jackson says. “I then pitch and tune the phrases till they sound musical. By this time there is no semblance to the source material.”

The result is often energetic but inhuman psych rock, whipped into a frenzy by a charismatic vocalist who doesn’t exist. Take Heavy Breathing’s latest single, “Night First” (stream it below). Over a propulsive organ riff, a robotic croon doles out vaguely meaningful sentence fragments: “I can’t believe,” “Yes, I’m feeling,” a garbled cadence that could very well be the title of the song.

“Basically, the vocals are another instrument that produces riffs and rhythms,” Jackson says. “The actual words are open to the listener’s interpretation.”

As novel as this process may sound, Jackson dates it back to The Apes.

“When we did Apes, we had a recurring mad computer character called the Rhythm Machine, who appeared on several albums,” Jackson says. “This mad robot was kidnapped to help us write songs. Years later with the progression of computer power, the vision became reality.”

“The ass on the cover we just call Steve,” Jackson says.

Jackson cites a range of influences for Airtight, including “the feeling and memories of late-night television shows,” SCTV, “our love of riffs,” humor, “abstract violence” and “a dash of spiritual mumbo-jumbo from the Master Computer in the sky.”

But overall, the artist says, Airtight “is supposed to be a good time.”

Heavy Breathing plays Nov. 19 at Black Cat with !!! and Stereolads.