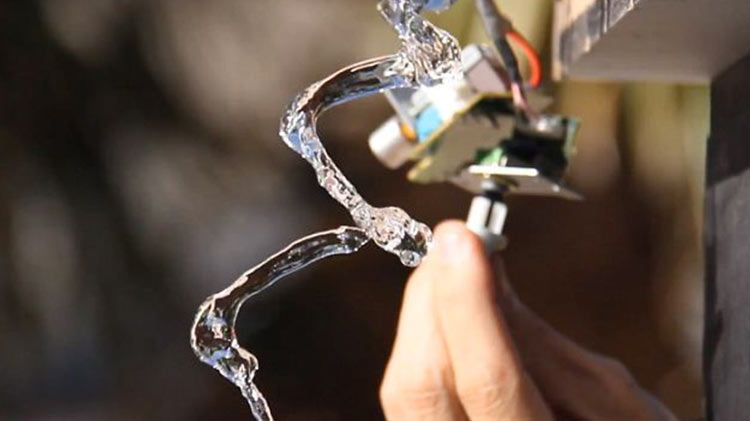 Water can be made to appear to flow in a remarkable corkscrew shaped stream by means of a simple experiment involving the right frequency of bass and a video camera with an adjustable frame rate.

A mesmerising YouTube video shows how one amateur scientist made the flow appear to stay still then, by adjusting bass frequency, rotate in both directions.
The video, uploaded along with a how-to guide by user brusspup on Monday, has already gone viral – attracting nearly 500,000 views and nearly 18,000 ‘thumbs up’.

Brusspup said on the video-sharing site: ‘This is a really fun project and when you first see the results, chances are your jaw will drop.’
The effect cannot be seen with the naked eye, so anyone who wants to try it at home will have to first get their hands on a camera capable of shooting at exactly 24 frames per second.
To recreate the effect, the first thing you will need to do is get hold of an amplifier and a speaker with a frequency response low enough to reach 23hz – a very low bass sound.

Connect the speaker to a computer running tone generating software – many such programs are available as open-source freeware – and tune it down to 24hz
Take a soft rubber hose and connect that to your tap, then run it down past the speaker, across the cone, so that one or two inches hang past the bottom of the case, and tape it securely into place.

‘The goal is to make sure the hose is touching the actual speaker so that when the speaker produces sound (vibrates) it will vibrate the hose,’ brusspup explains.
Point the camera at the end of the hose, turn on your tap, press play on your tone generator and, as brusspup puts it: ‘Watch the magic begin’.
The effect can be changed by altering the frequency of the tone. Set it to 23hz and it will look like it’s moving backwards. Set it to 25hz and the stream will appear as though its moving forward in slow motion.

One of the top rated comments on the video’s YouTube page explains how it works. User necraduq explains: ‘When the frequency of the speaker is the same with the frequency of the video frames (frames/sec) the camera actually captures the same frame everytime and thus the same water shape.
‘You can see the change 1hz makes when filming (if filming is kept at the same rate 24fps) as this translates into a “forward movement”.
‘Imagine a clock with only a seconds indicator. If you would close your eyes and open them precisely once every 60 seconds you would think the indicator is not moving.’