The futuristic battle cry “War of Apples”, the opener off of the new EP Coast to Coast by Swedish group Tross, gives attention to one of the band’s greatest attributes: stamina. Originating in Gothenburg (with a two members now living in Stockholm), Tross exemplifies the ambitious spirit of their krautrock roots, leading the listener confidently into their soundscapes. There are moments of glistening grooves evoking the starry-eyed whimsy of AIR, like on “Stars and Cones”. Aquatic elements are recalled through surf rock reverbs and oceanic waves of distortion on “Rainbow”. The steady, insistent backbone of the drums and bass flow graciously through tempo changes, allowing for delightful experimentation by the rest of the band that gets the message across and propels the march forward. Tangerine Dream would be proud of this spacey stomp. Slim Twig of DFA Records fame seems to be a fan, giving the band a play on his BBC 6 show this month. 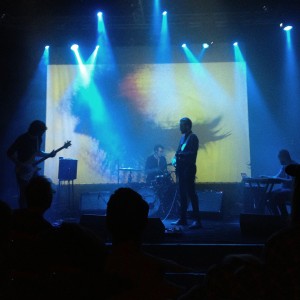 Tross has shared the stage with the likes of Wooden Shjips, Dungen, and The Brian Jonestown Massacre, and are set to appear at Copenhagen Psych Fest 2016. There are only a few more vinyl copies of Coast to Coast available for purchase on Invisible Inc., so make sure you scoop up this confection while you still can! You can find the band’s full-length debut over on Hoga Nord Records.

Next post A New Trip Down an Old Road: Turkish Freakout