Electric Moon were founded in late 2009 by bassplayer/paintingartist Komet Lulu and guitarplayer Sula Bassana. Founder Drummer was Pablo Carneval, in early 2011 replaced by Alex, who was replaced by Michael in summer 2012, till spring 2013. Now Electric Moon have Marcus Schnitzler on Drums, who is also member of The Spacelords.

Electric Moon is set to appear on a Beatles Tribute CD/LP on Cleopatra Records in March 2015! 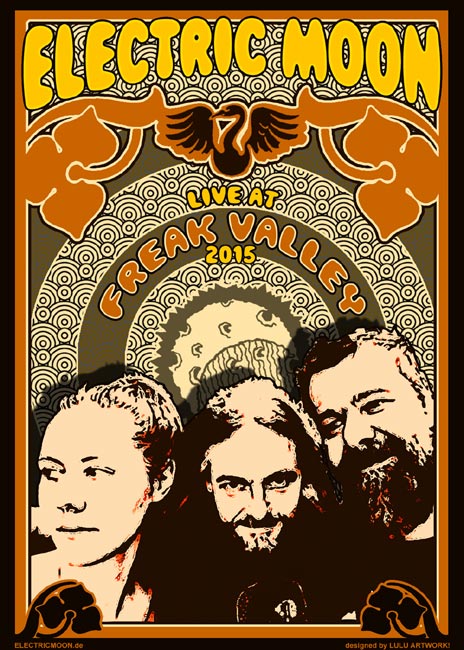 Electric Moon belong to the upper shelf of the European Psych- and Krautrock scene and played many festival gigs like Roadburn Festival (NL), Dark Bombastic Evening (RO), Yellowstock(BE) etc. Many LPs and CDs of EM have been released and currently they are working on a new record. Take a huge dosis of Psychedelia, blend it with some acid colors and get as high as you can – this is the state of mind, Electric Moon create with their sound. Especially their live appearances are a unique thing. They want to celebrate the love of the music together with the audience and the highest point of communication gets reached when there is happening a symbiosis between audience and band.

Thanks for sharing @Dave!

Previous post A Look Back To 1968 - Psychedelic Vancouver & The Hippies

A New Trip Down an Old Road: Turkish Freakout