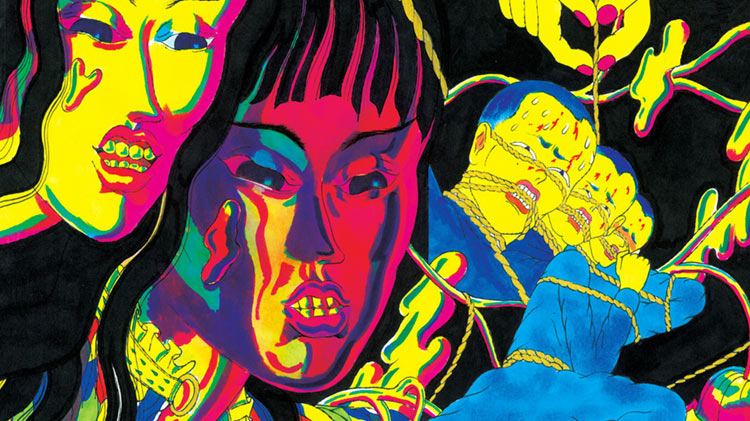 This year at SXSW, San Francisco rock luminary John Dwyer appeared not as part of Thee Oh Sees, the merry psychedelic rock troupe he’s fronted since 2008, but as frontman of The Coachwhips – an ultra-lo-fi garage trio he was wrecking ears with round about 2003. Dwyer’s tendency to ricochet his way through a variety of groups and side projects has occasionally made him appear the sort of maddening figure who’ll switch up the script right at the very moment success comes calling. Mind you, that’s just financial success – and who really gives a fuck about that when every fresh idea you turn your hand to gleams like gold?

Before Dwyer puts the Thee Oh Sees name to rest for a while to concentrate on his new solo project Damaged Bug, there’s just time for this last transmission. Recorded in – no, really – a banana-ripening warehouse with a tweaked line-up including drummer Chris Woodhouse and Ty Segall collaborator Mikal Cronin, it’s not quite the equal of its predecessor – last year’s breakneck, flute-powered ‘Floating Coffin’ ¬– but is a gem nonetheless: nine tracks of noise-spiked Nuggets-y psych-punk, each one hitting with the crisp concision of a long-lost jukebox classic.

The thrill of The Oh Sees isn’t so much in moments of outright mayhem as the way they create a neat equilibrium between chaos and control: see especially ‘Encrypted Bounce’ and ‘Savage Victory’, which lock into revolving, repetitious grooves, mere blank canvases for Dwyer to vandalise with streaks of lurid guitar. Point made, deeper into ‘Drop’ we find Thee Oh Sees flinging some unlikely instruments into the mix. A semi-acoustic ‘Put Some Reverb On My Brother’ sees Cronin adding blarts of saxophone, while the mannered ‘Kings Noise’ adds courtly strings and flourishes of harpsichord.

One thing we don’t often get from Thee Oh Sees is sincerity. Dwyer is more jester than troubadour, his songs privileging virtuoso acrobatics over real feeling. So it’s a neat thing to hear him bow out with a song like ‘The Lens’. A soft, cello-accompanied closer, it finds him singing “I will love you always” over some melancholic, ‘Penny Lane’-like orchestral filigree. Wherever John Dwyer goes next, we promise, the feeling is mutual.