Los Angeles, CA – Get on the bus with Siena Root, Sweden’s finest rock band, as they set out on a virtual musical trip along the dusty highways of American shores. Pioneers, the band’s first album to be released in the U.S., will allow American audiences to catch the contact high that Siena Root fans in the group’s native Stockholm have been riding for years. A heady, heavy blend of Deep Purple and Iron Butterfly, Pioneers will be blowing minds starting November 18 courtesy of Cleopatra Records. 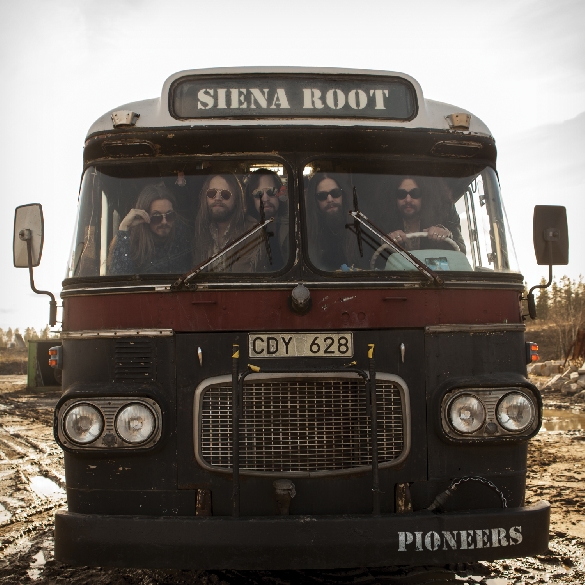 An experimental project with roots in analogue, old school ‘70s rock, Siena Root was founded in Stockholm in the late ‘90s. The quintet quickly honed a sound that is classic yet original, based on heavy organ, howling guitars, gigantic bass riffs, even bigger drums and bluesy soulful vocals. The lead off single from Pioneers, “The Way You Turn,” perfectly captures the group’s dynamic beginning with a virtuoso organ solo followed by rolling drums and a blazing guitar riff that both scorches and grooves. The band filmed a concept video for the song that dramatizes these retro rockers’ ability to turn all that is modern (from cars to guitars to phones and clothes) into vintage treasures with just the touch of their hands.

The band has already earned high praise from some of their musical forebears. Mick Box of Uriah Heep exclaims, “It’s nice to hear a band like Siena Root playing it for real in this overly-processed world that we live in. Power to them, and I wish them all the success in the world!” Likewise, drum legend Carmine Appice of classic rock bands Vanilla Fudge and Cactus, had a chance to watch the video for “The Way You Turn” and exclaimed “Very cool song and video!” The album also features a special bonus track, a smokin’ cover of Zep’s “Whole Lotta Love,” not available anywhere else!